The twenty teams vying for the tournament are divided into five groups of four teams each. The draw for the championship is therefore as follows: 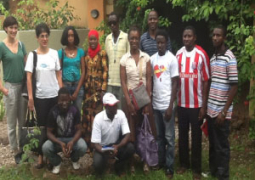