The association comprises natives of Karantaba village residing in the village and those in the Kombos as well as in the Diaspora.

The two-day forum of the association was held at Karantaba Lower Basic School under the theme “Speaking a voice for peace and unity”.

Declaring the two-day forum open, Chief of Kiang West District, Alhaji Omar Gibba, commended the association for their foresight in coming together with such development-oriented ideas.

“This is what is called patriotic citizenship because by forming the association, you people have demonstrated your true love for the village and The Gambia as a whole,” Chief Gibba said.

The president of KKDA, Edrisa Sanyang, said the citizens of Karantaba, be they in the country or outside, all share the objectives of the association.

He thanked the natives of Karantaba in the Diaspora for their immense contribution towards the success of the AGM.

He said the AGM has the potential to brace Karantaba for progressive developments in all spheres of human engagement.

Marong explained that for the sake of the association, the people of Karantaba are divided into three groups:Karantaba residents, Kombo residents and those in the Diaspora.

The technical adviser said each of these groups will organise themselves, network with other groups and develop a common vision, mission and strategic roadmap for the sustainable development of the village. 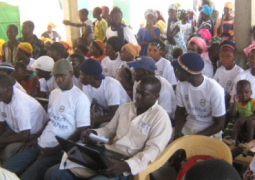