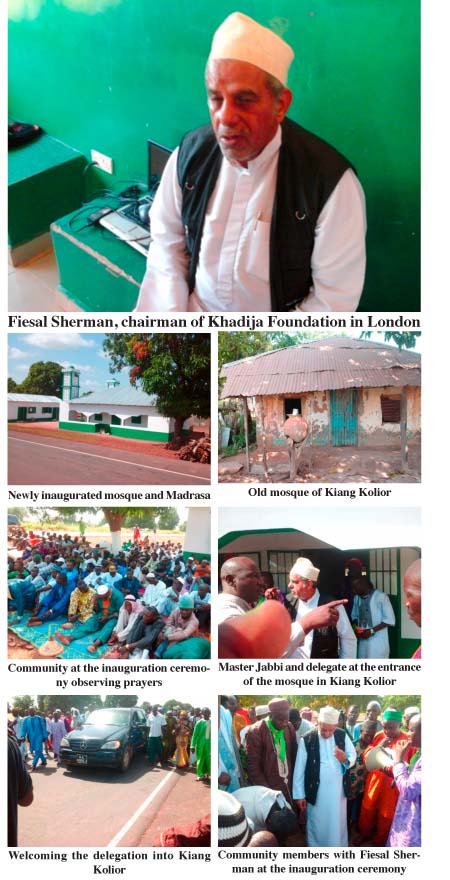 Khadija Foundation based in London through their counterpart in The Gambia, Khadija Centre-Gambia, Friday inaugurated a newly- constructed mosque together with a madrassa and a concrete well for the community of Kiang Kolior in the Lower River Region.

The mosque, madrassa and the concrete well were funded by Khadija Foundation based in London under the chairmanship of Feisal Sherman.

The construction works were implemented by Khadija Center-Gambia, under the supervision of the foundation’s chairman in The Gambia, Muhammed F. Jabbi, who is the principal of Brufut Upper and Senior Secondary School.

The inauguration ceremony was attended by hundreds of Muslims within and from the neighbouring countries, as well as the Governor of Lower River Region, National Assembly member for Kiang East, Chief of Kiang East, representative of Kolior Kombo Association and the imam of Jarra Soma Central Mosque, Saikou Kanteh.

Speaking on behalf of the community, the alkalo of Kiang Kolior, Ba Musa Samura, and the village imam, Lamin Camara, both expressed their appreciation to the sponsor for giving them a standard mosque

They also commended Feisal Sherman, chairman of Khadija Centre Foundation in London and the implementing partner in The Gambia for constructing a new mosque, madrassa and new local well for the village.

Fiesal Sherman, chairman of Khadija Foundation in London, expressed his satisfaction with the level of works done in the mosque and other projects.

He said the money had been put into good use and at the right place, adding that their local coordinator, Master Jabbi, “is a very honest person and trustworthy, who has love for his people”.

“As a result of his loyalty to the foundation, I would like to continue to work with Master Jabbi in the best interest of the Gambian people who are very hospitable,” said Mr Sherman.

Also speaking was the chairman of Khadija Centre-Gambia, Mohammed F. Jabbi, who praised the Almighty Allah for giving him the strength and ability to bring this foreign investor to The Gambia.

He said he had nothing to say but to thank the Almighty Allah for the tremendous assistance the Khadija Foundation in London had rendered to the people of this country.

Mr Jabbi commended the communities of Kolior village for the warm welcome accorded him and his delegation from London.

According to Mr Jabbi, the foundation had so far built five mosques in The Gambia in various communities, adding that there was a need for the village of Kiang Kolior to have a new mosque, as the old mosque was built since in the 1960s.

He said looking at the nature of the old mosque, the foundation thought it wise to build a new mosque for the said community and its catchment areas.

“As Muslim, we need a decent place, decent house, and a decent mosque where we can pray,” he said.

He said the community of Kiang Kolior has also been blessed with a madrassa and concrete well with clean drinking water fit for human consumption.

Mr Jabbi revealed that plans are underway to open another mosque in Sukuta by December 2015, which is also being funded by Khadija Foundation in London.

He thanked the security officers, particularly the police officers at Kiang Kolior through their station officer, for the vital role they played in the successful inauguration of the mosque.

He also thanked the Government of The Gambia, under the leadership of President Yahya Jammeh, for creating an environment conducive for foreign investors to come and invest in the country.

“This is a clear indication of the love and care President Jammeh has for the people of the country,” he said.

According to Master Jabbi, all that is needed for the advancement of the country is commitment, unification, dedication, determination and hardwork.