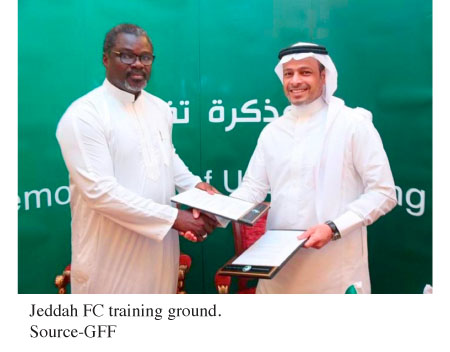 For the first time in the history Gambia football, Gambia Football Federation (GFF) has signed a partnership agreement with Saudi Football Association.

President Lamin Kaba Bajo added another monumental breakthrough at his Saudi visit as he signed the Memorandum of Understanding (MoU) with is counterparts at Jeddah to establish a bilateral cooperation between the two Football Federations.

The cooperation was signed on behalf of the Saudi FA by its Vice President Mr Khaled Althebiti.

The details of the MoU include amongst others hosting of Gambia national team on training camps, providing support in technical areas like refereeing, coaching and infrastructure.

Mr Bajo earlier had meetings with both the President of the Spanish FA Luis Manuel Rubiales Bejar and the Director of international Relations for the Spanish FA Jorge Mowincle Sagnier on the possibilities of forging cooperation between the two Federations.

Man convicted for causing loss to Gamtel, others