Sanchaba Youth and Sports football tournament which is currently underway at the Steve Biko football field in Cape-point, continues to attract a large turn-out from supporters within and outside Bakau as the tournament entered its fourth week.

Junior Arms of Fajara Barracks who are rated as the most compact and outstanding team in Bakau of recent times were held to a pulsating goaless draw against Kadijatou FC at the Steve Biko football field last Saturday.

The team led by their inspirational captain Ebrima Janko Fatty, widely known as (KAKA), opened their campaign with an impressive 3-nil victory over Kachically FC. The most in-form team a fortnight ago failed to beat Ron-Mango  after the new Town boys entertained them to a one-all-draw.

Coach Bakary Darboe and his Junior boys were on Saturday 6th June 2009 again held to a goaless draw against Kadijatou FC at the Steve Biko football field in Cape-Point.

The influential Captain Ebrima Janko Fatty or (KAKA) has won the hearth of his supporters due to his soft passes and beautiful ball control through out the game. Kaka had his side's first chance of the titanic encounter but his 25-yard free-kick in the 17th minute was not good enough to earn him a happy moment.

Alpha Omar Jallow, Landing Sawaneh and Dawda Sarjo all had their scoring opportunities but their efforts proved futile.

Captain Modou Danso and Striker (Rooney) both failed to make the best use on the numerous scoring chances they created for Kadijatou fc.

Their hope of snatching a victory was even dealt a serious blow following the dismissal of Junior Arms Defender, Rodly Johnson, mid-way through the second period. But despite that, Kadijatou FC could not manage to break the deadlock.

The game was Junior Arms' second consecutive draw in a row which left them at the second position on  9  points in four games. But if the words of the head coach of the Fajara Barracks boys Bakary Darboe are anything to go by, the team will soon recover from their disappointing performance in the tournament.

He went further to blame the central referee for what he described as a poor performance although he felt his side could have scored many goals. 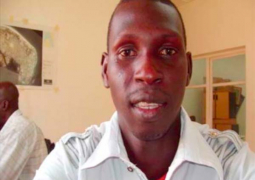