Following the defence counsel's 'no-case to answer' submission in the ongoing criminal charms trial involving three accused persons Abdoulie Osseh Correh, Alasana Mbowe and Babucarr Njie, the Banjul Magistrates' Court presided over by Principal Magistrate E.F. Mbai last Tuesday overruled the defence counsel's 'no case' submission on the ground that the accused persons have a case to answer as charged.

However he added, "let it not be forgotten that pw1 in his examination in chief told this honourable court that it was the first accused who sent for his air ticket to travel from Sierra Leone to The Gambia so as to protect the 10 gallant men against weapons". He pointed out that pw1 told the court that it was the1st accused who offered him US$1500 for each of the gallant men to be protected against the guns. PW 1 went further to call all the three accused (whom he mentioned by their names). Magistrate Mbai further stated that the accused persons decided to meet at the 3rd accused compound in Bundung where the juju was to be tested.

He added that in view of this the accused persons have a case to answer calling them to enter into their defence.

He said that 1st accused admitted that he located pw1 and sent him an air ticket and pocket money to come to The Gambia. He added that the prosecution witnesses told the court that second accused person said he would be responsible to test the Juju.

At that juncture the case was adjourned to for the accused persons to enter into their defence. 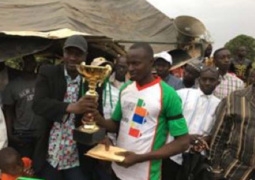