UNAIDS and the National Aids Secretariat (NAS), in collaboration with the Association of Health Journalists (AOHJ), recently organised a daylong sensitization workshop at the Girls Guide Hall in Kanifing.

The briefing was meant to increase the members’ understanding of universal access to HIV/AIDS treatment, prevention and support held in June 2011.

The meeting looked at the outcomes, commitments, indicators and targets of HIV/AIDS update in The Gambia and the current situation of the national response “getting to zero” the new UNAIDS strategy and the role of the media in promoting universal access and the way forward.

Speaking at the opening ceremony, UNAIDS country officer, Nuha Ceesay, said: “This high-level meeting came at a critical moment of global AIDS response in that deadlines for achieving key goals and targets unanimously set by the member States to reverse the pandemic, including the goal to achieve Universal Access to HIV prevention, treatment, care and support which expired at the end 2010 were reviewed and this resulted in the adoption of Resolution 65/277.

He noted that the global leaders also adopted the new UNAIDS strategy-getting zero band call on all concerned parties to ensure the implementation of robust programmes that would lead to zero new infections, zero AIDS related deaths and zero stigma and discrimination.

According to Mr Ceesay, symbolically, 2011 also marked 30 years since the beginning of the AIDS epidemic and the high level meeting therefore provided the platform where delegates took stock of three decades of response to HIV/AIDS at the country, regional and global levels, as well as agree on concrete actions for the next five years, which will occur in 2015.

AIDS movement is a story of people breaking the conspiracy of silence and demanding equity and dignity and also the story of people who are confronting society’s wrongs and seizing their rights to access comprehensive prevention, treatment, care and support services.

Mr Ceesay said that in The Gambia the prevalence is still below 2%, adding that close to 2,700 people living with HIV are currently on treatment and 56,000 Gambians have done a test and knew their results and the number of treatment sites have increased from one pilot in early 2000 to 10 treatment sites while the number of societies of people living with HIV has increased (Santa Yalla) in 1997 to 10 support societies and two Networks - GAMNASS and Mutapola.

For his part, the Director of National Aids Secretarial (NAS), Alieu Jammeh, said that the audiences experiencing health inequalities firsthand can read these absent societal determinants into coverage from their personal experiences and invoke communal responsibility for health, nothing that they can resist medicalizing representations and give up an invitation to reduce their health concerns solely to the medicalized agenda and lifestyle ‘choices’ as proposed in health coverage.

Mr Jammeh thanked the UN, UNAIDS, Global Fund, the NGO community and the Media for their contribution in the national HIV/AIDS response.

They stressed that sensitizing the health reporters would further enhance their work in sensitising the general public to change their attitudes towards people living with HIV/AIDS and do away with discrimination and stigma. 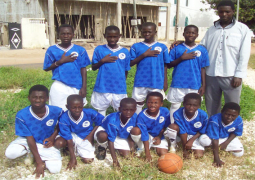