Speaking at the training, executive director, RAID-The Gambia, Sambujang Conteh, said the day marked another important milestone in the history of The Gambia Tobacco Control as The Gambia is a signatory to the WHO FCTC and as a state party it is an obligation to fully implement WHO FCTC in the country.

The Government of The Gambia alone could not do it without the support of stakeholders, he said.

This was why the Ministry of Health & Social Welfare created the multi-sect oral working group which includes more than thirty-three (33) government ministries and institutions to work together as a team, so the government could achieve the objective of FCTC, he said.

The media play a very important role in disseminating accurate information to the general public, he added.

He said article 12 of FCTC talks about education, communication, training and public awareness, which reads: “Each party shall promote and strengthen public awareness of tobacco control issues, using all the available communication tools, as appropriate. Towards this end, each party shall adopt and implement effective legislative, executive, administrative or other measures to promote.”

That’s why RAID–The Gambia, Ministry of Health and WHO Gambia office organised the training programme for media personnel to understand FCTC and its content, Mr Conteh stated.

At the end of the training, as journalists they would be able to understand their positive role to support the process of implementation of FCTC in The Gambia.

The Ministry of Health & Social Welfare has the driving seat in the fight against tobacco use in The Gambia and with the support from the journalists they could easily achieve their objectives.

“I know that tobacco companies are very powerful and have resources to undermine the implementation of FCTC. We should work together as a team being the government or civil society organization to protect our future generation from danger associated with tobacco use,” Mr Conteh said.

“Tobacco claims more than 6 million lives annually; about 600,000 die as a result of second-hand smoking, and if current trend does not stop tobacco will kill 8 million people by 2030. We need to act now to control tobacco use in our society,” he stated.

Modou Njai, director of Health Promotion and Education, said it was an important day in the fight against tobacco, in which the media play an important role.

He said government “is closely working with the media” as they are partners in development, adding that government enacted the anti-smoking Act 1998,demonstrating the commitment of government to the fight against tobacco and its control. 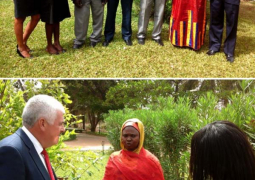