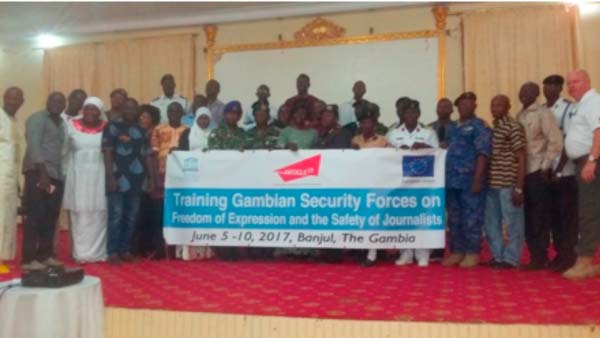 At the just concluded training of Gambia security forces on freedom of expression and the safety of journalists by Article 19 and UNESCO, has recognised that journalists are partners in national development.

It was also clearly spell out the important role information could play in good governance, democracy and human rights.

The participants were also interviewed and a positive comments where make that journalists are not threat but watchdog to the nation.

The initiative supported by the European Union has brought cordial relationship between journalists and the security forces in understanding the power of information in enabling peace, sustainable development and democracy through promoting freedom of expression, freedom of the press and fostering safety of journalists at the country level.

The Goodwin opportunity has brought better understanding on the role and functions of journalists in a democratic society and establishes professional relationship between the security forces and journalists as they have common goals in the country’s wellbeing.

It has cleared doubts on crucial obstacles to the development by stopping journalists from getting information or seen as threat in their work, especially in times of investigation or dealing with suspects by the law enforcement officers.

Security forces were taught how to deal with journalists on every given situation and also how journalists should respond and respect their work.

Lt. Col Baboucarr Sangany of the Gambia Army Forces, said the training was very productive and they have learned a lot about Article 19 in improving their cordial relationship with the journalists.

He said in the former regime journalists have been term as no go area but with the new dispensation everything would change as the training was an example.

Momodou D. Mballow, head of legal affairs unit at the Gambia Police Force, said the training was important as it would help both parties to work on their strengthen and weakness.

Ebrima Baldeh of GRTS said the training was vital because there was so much difficult between journalists and the security force in the past.

The journalists are have been seen by the security forces as instigators of trouble or critical of government and they feel talking to the journalists would land them in trouble.