In fulfillment of its pledges to provide easy access to education in the country, the Jolly Riders a UK-Gambian, based charitable organisation has dished out 6000 bicycles to Gambian schools from June 2006 to date.

This confirmation took place at the handing over ceremony of yet another set of bicycles amounting to 401 bicycles shared between seven schools across the country. The beneficiaries Boiram Basic Cycle in CRR South, Koro Julakunda Basic Cycle in URR and Bakalarr Madina Basic Cycle in the North Bank Region each received 301 bicycles.

Addressing the beneficiary schools, the Director of the Jolly Riders foundation in The Gambia, Mr. Baboucarr Boyo Touray emphasised that the donated bicycles solely belong to the above mentioned schools as teachers and students come and go, but schools remain in the same place. He said nobody should claim ownership of the bikes other than the school.

Touray further stressed that the bikes are meant to encourage and facilitate access to school in order to enhance quality education, but not to be used otherwise.

He called on parents and the communities to assist the schools in the maintenance of the bicycles, so those upcoming students can also benefit from it.

Chairman Barry Wright of the Jolly Riders Gambia chapter expressed gratitude at the gesture. He also called on the communities to help maintain the bicycles for future use.

Deputizing for the Governor of Western Region, Mr. Mamudu Keita hailed the Jolly Riders for their philanthropist gesture, noting that it has helped a lot in providing easy access to education and reducing the burden of responsibilities on parents and guardians. He encouraged them to keep on supplying Gambian schools with bicycles, especially those in the rural areas.

On behalf of the beneficiary schools, the Head Master of St. Andrews Lower Basic School in Berending, Kombo South, Mr. Domingo Mendy commended the Jolly Riders for what he described as a benevolent gesture. 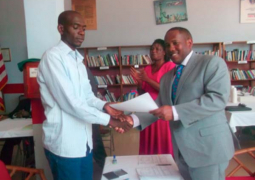