JESUS OF NAZARETH SAVIOUR AND REDEEMER OF THE WORLD

When the Saviour and Redeemer of the world, Jesus of Nazareth, was sent into the world, He did not come in style like a modern king with all the pomp and pageantry as Israel, under Roman rule, would have expected, no; rather He came unnoticed, as an ordinary person, even as a pauper--no home, no shelter. The reason? He was commissioned to carry out an apolitical mission. It was intended for Him to save the souls of men, women and children lost in sin following the disobedience of our ancestors, Adam and Eve.

Jesus, the Saviour of the world, made His entry on earth in the manner all human beings do. He was born of a woman. However, He came to live and die amongst us. He came in order to show us how to live; but most particularly to crush sin and death and to open an access through to the Father so that we might obtain eternal life. “For God so loved the world that he gave his one and only Son, that whoever believes in him shall not perish but have eternal life.” (John 3:16) Yes, He came so that we may no longer fear death, and that we may cease to be slaves to sin.

Yes, the first Adam had put up a poor performance in the Garden of Eden against Satan’s craftiness when the latter disguised as a serpent succeeded in seducing Eve. The second Adam, Jesus, however had come to lift humanity’s head up, and to redeem humankind. “He committed no sin and no deceit was found in his mouth.” (1 Peter 2:22) Humanity had bowed to the seducer, the accuser of humankind and the evil one; but Jesus came to conquer death and liberate us ‘once and for all.’

When the angel announced the virgin birth to Mary, he added: “He will be great and will be called the Son of the Most High. The Lord God will give Him the throne of His father David, and He will reign over the house of Jacob forever; His kingdom will never end.” (Luke 1:32-33)  Jesus’ kingdom’s is neither physical nor earthly. His kingdom is in the souls of men and women, God’s creation. That is where He would reign and that kingdom will have no end. It will be eternal, everlasting.

What Jesus says about Himself

During one of His teachings our Lord Jesus refers to Himself as the Good Shepherd taking care of the sheep and He declares: “I have come that they may have life, and have it to the full.” (John 10:10) He warns that the devil; “The thief comes only to steal and kill and destroy.” (John 10:10) Jesus comes to the rescue; “For I have not come to call the righteous, but sinners.” (Matthew 9:13) Yes, Jesus loves sinners but not sin. He “wants everyone (all men) to be saved and to come to the knowledge of the truth.” (1Timothy 2:4)

He further emphasises: “My food is to do the will of Him who sent me and to finish His work.” (John 4:34) And just as He accomplished this assignment on the cross, He pronounced: “It is finished.”

Many of His statements confirmed who He was and from whence He came and what His mission was. He declared unambiguously: “I am the way and the truth and the life. No one comes to the father except through me.” (John 14:6) No one challenged Him. Once, after reading a passage from Scripture (Isaiah 16 verses 1 and 2) which he had been asked to read during a worship service, the Master commented: “Today this scripture is fulfilled in your hearing.” (Luke 4:21) The passage briefly summarised His role on earth. “The Spirit of the Lord is on me, because he has anointed me to preach good news to the poor. He has sent me to proclaim freedom for the prisoners and recovery of sight to the blind, to release the oppressed, to proclaim the year of the Lord’s favour.” (Isaiah 61:1-2)

This did not go down well with the elders and they drove him out of the synagogue and would have lapidated Him. They took offense that a local country boy should claim divinity or should assume He was the Messiah come to save the people of Israel from sin.

Many have rejected Jesus with human reasoning for things that are spiritually discerned. But this was already foreseen and predicted.   “A stone that causes men to stumble and a rock that makes them fall.” (Isaiah 8:14) In His day, He was rejected by the elders–the Pharisees, Sadducees and Scribes; but Scripture says of Him: “The stone the builders rejected has become the cornerstone.” (Psalm 118:22)

God’s final say in the matter is; “See, I lay a stone in Zion, a chosen and precious cornerstone, and the one who trusts in him will never be put to shame.” (Isaiah 28:16)

The hymn writer invites: ‘Oh come to my heart Lord Jesus there is room in my heart for you.’ Let every heart prepare Him room at His coming. 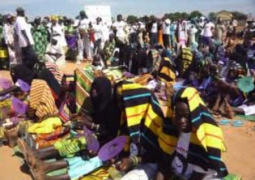