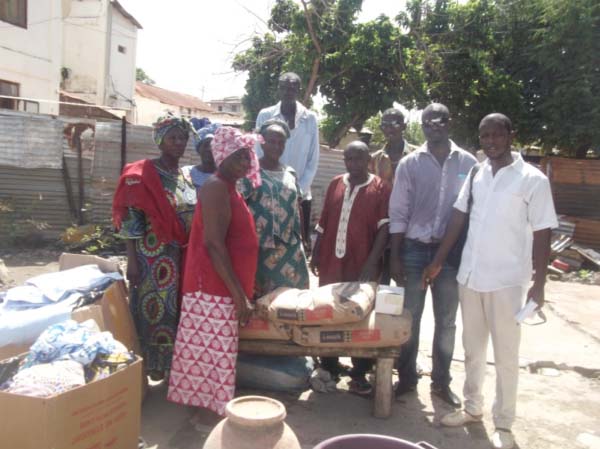 The households were left homeless after fire outbreak in April 2015 at 12 Louvel Square ravaged their entire houses and belongings.

“This help was as a result of a story that was published in Foroyaa newspaper about the heavy rain storm that affected 22 households, school in Banjul published on 17 August 2015 and authored by Muhammed Sailu Bah,” said Modou Sarr, an executive member of JCM foundation.

He said they later went to Banjul to see the victims and upon arrival they found out that the fire victims should be the number one priority for help.

Mr Sarr said the foundation was established eight months ago and their main area of intervention is to help school children.

He said it was the condition of the victims that made them to give a helping hand.

Tunko Jammeh, councillor of Soldier Town Ward in Banjul, commended the donors for “their kind gesture”.

He said he will work with the ward to participate in the workmanship to reconstruct the houses.

He revealed that he received 20 bambo designed sticks, 8 bags of cement, 15 bags of sand, 3 packets of corrugate, 2 gallons of paint, and 7 kilograms of nails, and a full large carton of clothes and shoes for the victims.

Dawda Drammeh, councillor for Campama Ward, said for the first time in Banjul, “a foundation complements the efforts of the National Disaster Management Agency”.

Imam Ousman Nyang, Fatou Darboe, Adelay Davies, and Abiosheh all thanked the donors for their efforts.

One of the beneficiaries, Amie Jatta, also commended JCM foundation referring to their invention as a miracle.

She said since the outbreak occurred, they have been homeless and without clothes.