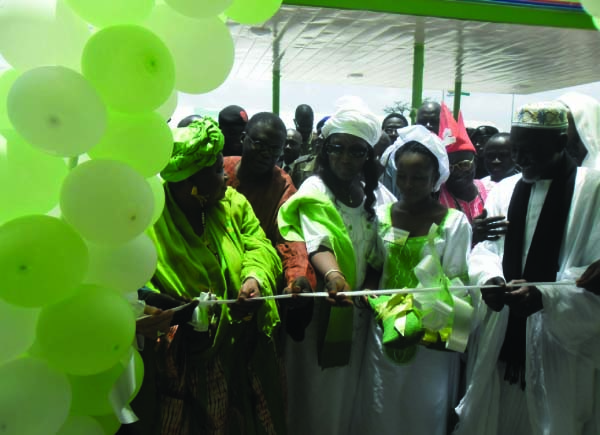 President Yahya Jammeh has underscored the importance of petroleum resources in the social and economic transformation of the country, noting that this needS not to be over-emphasised.

In a statement read on his behalf by Aja Dr Isatou Njie-Saidy, Vice President and Minister for Women’s Affairs, at the official ceremony inaugurating the Gambia National Petroleum Company (GNPC) service station, President Jammeh said exploration activities in the past have indicated The Gambia’s endowment in petroleum resources and, therefore, several efforts have been spearheaded in preparing ourselves for a successful take-off.

He stated that the enactment in 2004, of a modern petroleum law as a framework for exploration, development and production; the adoption of a model petroleum license that provides the basis for negotiations with international oil companies interested in investing in exploration and production, among others, are examples of the measures put in place so far for the efficient management of the upstream petroleum sector.

According to him, the first service station built by the GNPC demonstrates that the national petroleum, which was created in 2003 as the business arm of government in the oil and gas sector, is capable of becoming a successful oil company of international standard.

He added that the occasion was further testimony that the creation of the GNPC, as an added institutional strengthening measure, has been a well thought-out plan necessitated by the international best practices of ensuring that the national oil company is set up to become that commercial outfit that would represent Government’s interest in the petroleum business.

"With the necessary staff complement, requisite skills and dedication, the GNPC can be transformed into an international oil company, the business of which will transcend the boundaries of this country," he further stated.

He commended the Government and people of the Republic of China on Taiwan for the strong support it has provided not only for government’s development agenda in downstream petroleum activities, but also in petroleum exploration and development programs, at the upstream level.

Tenneng Ba Jaiteh, the Deputy Minister of Petroleum, said the project including the civil works, the canopy, underground storage tanks, fuel pumps and the totem cost about D23 million and was financed jointly by the government of the Republic of China on Taiwan and the Gambia government.

According to her, the service station is the first of several others to be constructed throughout the country.

"This petroleum service station before us today is one hundred percent Gambian-owned, hence the slogan "Nyor Kor Mom". The project has been conceptualized, designed, constructed and supervised by Gambians," she added.

The deputy minister said the Ministry of Petroleum and the GNPC are well aware of the competitiveness of the petroleum marketing business, as clearly manifested by the proliferation of service stations, particularly in the Greater Banjul Area.

"Being a new entrant in this business, GNPC has decided to come into the show with a difference by firstly building structures that would beautify the environment and, secondly by being very much concerned with environmental issues," she further stated.

Sarane Hydara, Engineering Consultant, said the service station has been designed and supervised to the highest standards in terms of safety by selecting leak detecting pipes for the supply of fuel from the tanks to the pumps.

He also commended the Government and people of Taiwan for their support in strengthening and building the capacity of GNPC, and for their help in the financing this project.

Others speakers included the Lord Mayor of KMC, Yankuba Colley and GNPC board member Fafa Sanyang.

The ceremony was chaired by Momodou Saidy, press officer at the Office of the President.