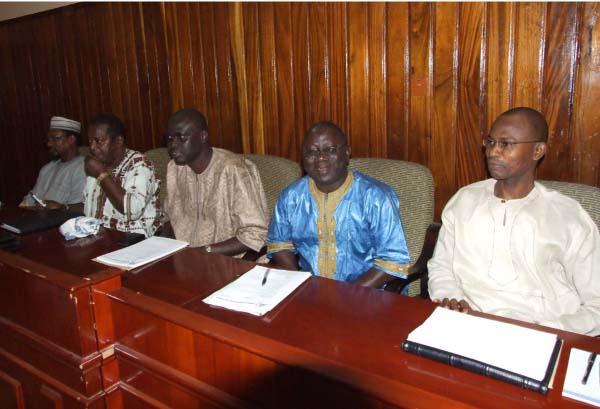 Top brass of insurance companies in the country on Saturday converged at a local hotel in Kololi to review the achievements and constraints of the Insurance Association of the Gambia (IAG) in 2013.

It was the 26th annual general meeting of the IAG during which senior insurance practitioners from various companies noted that the insurance industry made modest progress in the year under review.

They also pointed out that the industry has continued to face challenges like unhealthy competition among companies, which is hindering the growth of the sector.

Speaking on the occasion, the new president of the IAG, Almamy B. Jobarteh, said his ambition is to gradually tackle the main challenges of the industry to enable insurance companies tap the fallow but fertile areas in the market.

“The Executive Committee [of the IAG], under my leadership, is convinced that one robust way of achieving this is to lobby for the establishment of a National Insurance Commission which would be the driving force for the growth of the insurance industry,” said Mr Jobarteh, who is also the managing director of Sunshine Insurance Company.

“This is a major project for our industry and I wish to call upon each and every one of us (the insurance practitioners) to put together all the necessary resources and efforts to ensure the realization of this project,” he added.

Already a position paper on the establishment of a National Insurance Commission for The Gambia has been prepared for presentation to the authorities.

Code of conduct for the industry

The IAG President also said that some other areas his executive would like to look into are self-regulation and collaboration in practices, especially underwriting and claims management.

A draft code of conduct has been reviewed by the Executive Committee of the IAG to address these concerns.

The code of conduct is expected to take care of the unprofessional and unethical insurance practices that are partly responsible for the slow growth and development of The Gambia insurance industry.

Separation of Brown Card Scheme for the IAG Secretariat

Henry Jawo, secretary general of the IAG, for his part, gave a rundown of the activities the IAG undertook in 2013.

He pointed out that the process of separating the National Bureau of Ecowas Brown Card Scheme of The Gambia from the IAG Secretariat has been completed.

The National Bureau is now registered as a company of its own.This is in pursuance of the requirement of the Brown Card Protocol that insurance associations be separated from the national bureaux.Before this time, the activities of the National Bureau were under the auspices of the IAG Secretariat.

In this vein, Mr Jawo is offered one-year contract to oversee the smooth separation of the two institutions.

This followed expression of his desire to retire from the services of the IAG Secretariat.His retirement request came after having served as secretary general and CEO of the institution for the past 13 years.

The Executive Committee of the IAG considered his request and has offered him a one-year contract.

The IAG Secretariat is currently undergoing transformation and is expected to be in full position to further serve or meet the needs of the insurance industry.

Gaddafi: African migrants must be treated with respect in Europe