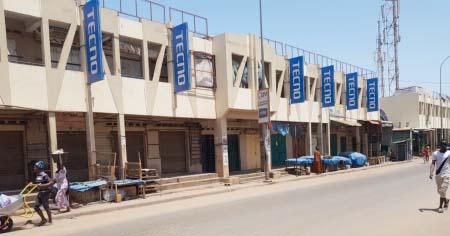 The business community has reacted following the declaration of State of Public Emergency.

The Gambian leader President Adama Barrow made the declaration in a televised statement on Friday evening amid intensified control measures against the deadly covid-19.

The proclamation orders closure of non-essential commodity shops, bars, cafés, casinos, sporting venues and all forms of public gatherings in bid to stop the spread of the novel coronavirus.

The move comes days after the suspension of all public gatherings including religious convergence.

Muslims in the country have for the first time been disallowed from attending the weekly Friday prayers in observance of the ban on public gatherings.

Streets within Greater Banjul Area, especially Serekunda, the place that plays host to country’s biggest market had few motorists plying the roads. Beaches and restaurants in the Tourism Development Area are literally empty as most tourists cut their holidays short to return home prior to the closure of land borders and airspace in wake of the pandemic.

Meanwhile, the president’s declaration on Friday has made some business owners and controllers as well as commercial drivers complain on the impact of the State of Emergency as their business and services are ordered closed.

“It is a welcoming idea from government, because we all don’t want the coronavirus disease to spread in the country but the government should also come up with mechanism before making such proclamation,” said Ousman Sillah.

Ablie Ceesay, a van driver, said that this proclamation has made all businesses slow, noting that the pronouncement has affected them as commercial drivers and businesses as well.

“Government should have waited a little longer for this pronouncement and try so hard to strategise on it surveillance measures against coronavirus. We are all praying not to get many virus cases in the country,” he said.

Alagie Said, a mobile shop owner, said that this pronouncement will make them go through tough times as it affects their businesses.

“Though it is good for the government to protect the country from the virus but it should not be by making such pronouncement. Here is where we get our earnings to feed our families,” he said.

Nyima Colley, a food vendor, said they are affected by the declaration but commended government for coming with such initiative.

“It is good that the government make the declaration now than later, because it is a known secret that government does not have enough materials to tackle the virus from spreading and as such this is one of the ways it could do to fight against the deadly virus,” she said.

Amat Sabally, a mobile repairer, noted that; “honestly things will be very difficult for us should it continue for a longer period. We have all our hopes in this business and if we are ordered to close for some time, it would really disturb us a lot.”

One Ousman Camara, welcomed the idea from government, but said he only blamed government for ordering the suspension of religious convergence.

Yankuba Marong, said that the declaration of State of Emergency came rather too early for The Gambia, adding that The Gambia has not reached that stage.

Meanwhile, both Mai Ahmed Fatty, GDC Party leader and Bakary Bunja Daboe, leader for GFA party, welcomed the government’s declaration of a state of emergency, calling all citizens and residents of The Gambia to join the fight against a global viral pandemic that is threatening the survival of the nation.

Regional League Tight at the Top Heading into Round Two