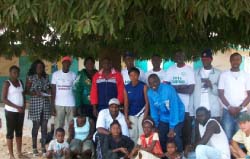 Immigration's Ba Jambo Bojang is winner of the two kilometre maiden run held on Sunday by the Brufut Running Club.

Bojang made a 26-minute finish amid 11 other participants at the Brufut Lower Basic School on Sunday morning.

The monthly run is part of the Brufut Marathon Committee’s initiative to fuel mass participation and interest in its annual run following a decline in the number of participants last December.

Alieu Jarjue and Ousman Sano made close finish on 2nd and 3rd in 29 minutes with seconds separating the duo.

Shortly after the run, Ba S. Jabbi, chairman of the Brufut Marathon Run Committee (BMRA), said the idea of the run was to form a club as it is done in football. The run, he also said, would help to promote health and cause interactions among friends.

Another committee member, Max Jallow, said a strategy had been designed on how to organise the Brufut Running Club. This, he added, would be "much different" from Sunday's curtain raiser.

"We have learnt a lot from today, and next month we will invite prominent people and senior government officials to participate to add more fun to the event," he said.

The next run will be staged on Saturday 5 February 2011 under the theme: Run against Sexual Abuse and Paedophilia.

The BMRA has also set its sight on a half marathon that will lead to a full marathon.

The running club is part of efforts at bringing back its most enthusiastic and non-competitive runners including children and the elderly.