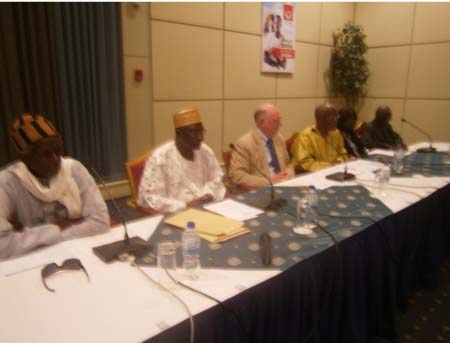 Speaking on the occasion, Thomas N. Hull, deputy chief of mission at the U.S. embassy in Banjul, said this was a programme that the US government was interested in.

He said they look forward to strengthening the IVLP partnership, because the alumni have shown commitment, and hoped they would be able to interact with each other in their various communities.

Omar A. Jallow, president of the IVLP, said the international visitor leadership programme was aimed at increasing understanding between the people of United States of America and the rest of the world, through cultural and other exchanges.

He said every year, current  and potential leaders across the world in both the public and the private sectors from diverse fields, are brought together to share experiences and share ideas on issues of mutual interest, as well as analyze challenges facing the world.

He added that in The Gambia, more than 300 men and women from various disciplines have since in the early 1960s gone through the exchange programme.

In 1970s, a first attempt was made to bring together members who benefited from the programme into an association called the Gambia-American Friendship Society.

According to Mr. Jallow, the organization was superseded by the formation of the Gambia IVLP Alumni Association in 2006, but launched in April 2007 as a non-political, non-governmental and non-profit-making organisation.

He added that membership is limited to Gambians who participated in the IVLP in the USA, and who accept the aims and objectives of the alumni association.

He said the US government through the embassy had fully funded coordinators to manage the day-to-day affairs of the association, as well as provide funding for the implementation of the community projects.

The projects include the promotion of environmental volunteerism with school children in support of biodiversity conservation in the Abuko Nature Reserve, and the women’s empowerment project which seeks to provide training to a group of young girls.