After a long standby, the Senegalese musician has come back with a renewed vigour which can be sensed in her new album on steam.

Since she divorced her husband and producer Bouba Ndour some years ago, it was normal that she stayed away for awhile from the studios, Viviane said.

During her brief recess, the Senegalese mbalax star was playing with her band in s nightclubs.

The queen of the Jollof band in this new album proves she is not yet ready to go off the stage. She said she could not afford to give up her childhood dream of becoming a musical icon through her music that thrill both young and old mbalax music lovers.

Viviane lost her beloved father at the eve of her musical carrier in a road accident when they were travelling with her sister.

After that tragic incident, the Senegalese mbalax star was in a coma for one month and spent another two months on hospital bed with complicated injuries.

Although Viviane had to divorce her husband and producer Bouba Ndour, a brother to Youssou Ndour, the duo’s families have worked hard to reunite them, and the new product in the market has brought back Viviane on top of the Senegalese musical chart. 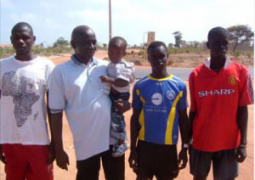