Big Fa is busy putting finishing touches to launch his first album come May 4 at the Alliance Franco.

The album, which contains 13 tracks, is available on sale at various recording studios in the country.

Speaking to journalists during a press conference recently at the Alliance Franco Gambienne, Big Fa said everything has reached the final stage to launch his first album, adding that he released his first single in 2003.

“In 2008 I was at the Gamcel Chart Box. In 2009 I released a single featuring Jalimadi and the single entitled Duniya,” he explained. “In the same year I have recorded with the Block Entertainment.”

Big Fa also has a compilation single featuring Dakar and Banjul, he said: “We have another compilation called ‘Music is Culture’. In 2013, I am working on my solo album and the album contains 13 tracks all in CD.”

The rising star is calling on all his fans to attend the launching and support the effort. “I work with different studios,” he said. 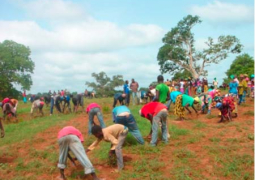