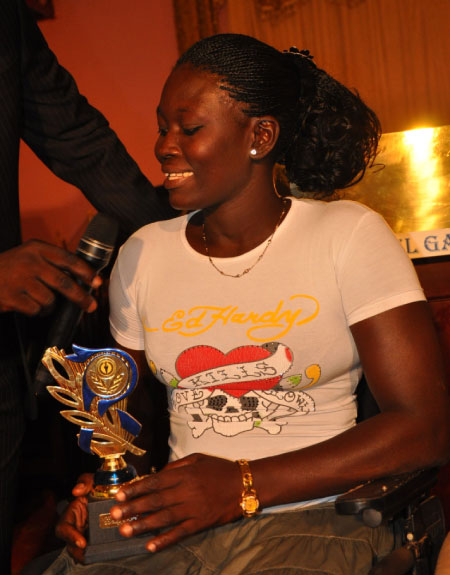 Gambia’s Paralympics athlete has been part of eleven shortlisted candidates for the first edition of the African Women Sports Reporters Union award.

According to AIPS, A galaxy of female African stars led by Kenyan Double World champion Vivian Cheruiyot and Perpetua Nkwocha, one of the greatest African player in the history of women football, make up an impressive list of 11 shortlisted athletes for the inaugural awards ceremony to celebrate the achievement of women athletes of 2011.

The Union of African Women Sports Reporters, UFRESA, last Thursday launched the awards and unveiled the final list at the headquarters of the Ivorian Press Agency on Plateau in Abidjan.

Besides the Nigerian forward, Nkwocha, who has been a key figure of the West African national team for about a decade and is a three-time African footballer of the year, and Cheruiyot, who recently won the Laureus Award for her sterling performance in 2011 that saw her win double Gold in the World Championships(5000 and 10000m) as well as the World Cross Country senior women’s title, there is the Malian basketballer Djenebou Sissoko, who was instrumental in her team’s qualification for the London Olympics, where she was also named the best player of the event.

Others are Isabelle Sambou, one of the two Senegalese wrestlers who will carry her country’s flag at the London Olympics.

The awards seek to recongise and reward the achievements of the female athletes who most of the time lurk in the shadows of their male counterparts in their respective countries.

The finalists from the 23-member countries were selected by the executive board of UFRESA headquartered in the Ivorian capital.

The winners will be announced on March 30 at the gala dinner at the Golf Hotel in Abidjan.

The panel has hard task of picking the winner of the pioneer awards as well as two other winners not only based on their competition performance but also their ability to inspire and act as role models in their respective societies.

Members of the public will also have a chance to pick their best candidates on www.pa-sports-ci.com and www.supportermondial.com.

According to the UFRESA president, Elisabeth Goli, apart from the athletes award for the journalists’ association, will also present trophies to the best African, the most outstanding athlete, a Special Jury Prize award for best actress to a lady who has contributed to sport development through peace.