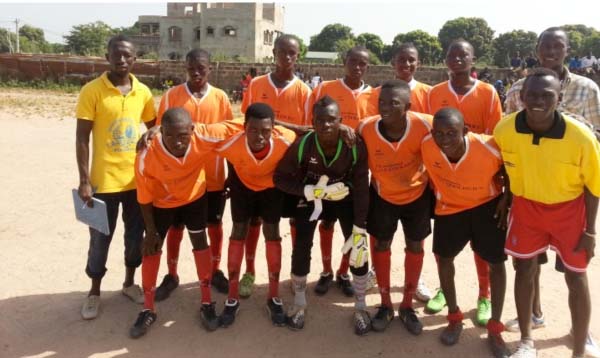 Black-Lions FC of Busumbala village in the Kombo North District was crowned champions of the Busumbala-Gambia Sport Foundation (GSF) Peace Tournament on Saturday.

They emerged victorious after trashing Cape Point FC by 2-1 in a well-contested game at the main football field in Busumbala.

The game which was keenly contested by both sides was described by football pundits in the village as one of the best games played in the competition. It was bankrolled by the GSF.

Both teams missed a couple of chances in the first fifteen minutes of the game, as their defences proofed hard to penetrate.

The game continued in a stalemate until the skipper of the Black-Lions FC, Momodou Dibba, scored a long range shot for the host team just five minutes before the half-time interval.

At the continuation of the game, Cape Point FC, the visitors, took control of the game, but they could not find the back of the net of the opponent team, whose defence was not taking any chances.

The Black-Lions FC skipper, who has been causing havoc in the opponent’s goal area, fired a 30-yard kick which was finished by Momodou Touray in the 17th minute of the second half, sealing victory for the hosts.

However, just five minutes before the final whistle of the game, Cape Point FC also snatched a consolation goal, after poor clearance from the Black-Lions FC defender.

Presenting the various prizes of the tournament, Yankuba Vermeulen, the GSF manager, said the purpose of the tournament was to promote peace, unity, tolerance and oneness, and that has been achieved.

“I am very delighted with the performance of the players in this tournament. Come next year, the GSF would come up with more surprises.”

He said the GSF will continue to support Gambian sports at all levels, especially at the grassroots.

Mr Vermeulen said the peace tournament was organised as a charity event, as all the participating teams paid no money to compete for the trophies.

“This is one such way of promoting grassroots talents, and the GSF would never relent in organising many more of such tournaments for the communities,” he said.

The best player award was given to Lamin Sanyang who won himself a set of jerseys and trophy, while the best goalkeeper award went to Malang Saho who received a new pair of gloves, a trophy and socks.

All the participating teams were each presented with a ball, and the four officiating referees were each given D400 at the end of the tournament.

Salifu Singhateh, coach of Black-Lions FC, Francis Davies of Cape Point FC, Modou Kebbeh of Galaxy, Tijan Samateh of FFP, and Lamin Jatta who was the brain behind the competition, hailed GSF for their support to Gambian football.