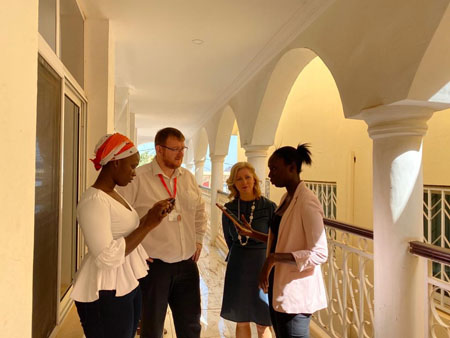 The Irish League of Credit Unions Foundation (ILCUF) have recently offered coaching to National Association of Co-operatives Credit Unions of The Gambia (NACCUG) to enable them to perform their roles effectively.

NACCUG is the apex body of all the 54 Credit Unions in The Gambia who are members but in total there are 76, 570 credit unions in the country.

The ILUF is a charitable arm of the Irish credit union movement and its mission is to alleviate poverty in developing countries by supporting credit unions, their representative bodies and other co-operative type organisations as a means for socio-economic development through the provision of financial and technical assistance.

The ILCUF volunteers aimed to contribute to decreasing loan delinquency and improving financial performance of credit unions by assisting credit unions in the area of loan management, credit control and financial statement interpretation.

General Manager of NACCUG, Foday Sanyang said they have continuous collaboration with ILUF because Irish credit unions are advanced, saying they want to emulate how they were able to move their credit unions from where it was and where it is now.

He said the volunteers visited almost all the credit unions to see their records and how best they can help them to do their work more effectively.

According to Mr Sanyang, the coaching program is a give and take process because there are some practices that both parties benefit from.

Michael Byrne, a volunteer from ILUF said they have seen good practices from Gambian credit unions but they are faced with challenges of insufficient resources and staff to do the work.

Bernie Moran said the credit unions need good recommendations in order to look up to better practices. She said credit union staff have the opportunity to network and learn from each other. “Joining the credit union is never the decision that you will regret. They are enjoying and sharing profits.”