World AIDS Day is being celebrated every December 1 to raise awareness about the scourges of HIV/AIDS all over the world, and it appears this campaign is helping children and adults alike from contracting the infectious disease. It is true that world leaders and international agencies aim to reduce the incidence of HIV/AIDS among people to 10%, or rather achieve a 90% victory over it, the 1.1 million children under the age of 15 prevented from having the disease between 2005 and 2013 is a great news and a welcome development.

According to Anthony Lake, the executive director for UNICEF, “We must close the gap, and invest more in reaching every mother, every newborn, every child and every adolescent with HIV prevention and treatment programs that can save and improve their lives.”

And to achieve this, medical services like Prevention of Mother to Child Transmission (PMTCT) has proved highly effective at bringing the rate of incidence to a bare minimum. Pregnant women with HIV/AIDS are treated so that they don’t pass the infection to their unborn children – and successes recorded in African countries of Botswana, Ethiopia, Malawi, Zimbabwe, among others have shown that the efforts are working out toward the ultimate goals.

Dr. Alina Alonso, a director at the Florida Health Department in Palm Beach County advises that undergoing frequent tests at regular intervals would help people diagnose the problem in time and learn ways to curb its spread among family and friends. The UNICEF report states that due to the fact that only 67% of pregnant women get access to effective treatment, about 190,000 children under the age of 15 lose their lives to HIV/AIDS as a result of lack of treatments.

World AIDS Day, observed on 1 December every year, is dedicated to raising awareness of the AIDS pandemic caused by the spread of HIV infection. Government and health officials, non-governmental organizations and individuals around the world observe the day, often with education on AIDS prevention and control.

According to Mr. Piyush- “World AIDS Day is one of eight official global public health campaigns marked by the World Health Organization(WHO), along with World Health Day, World Blood Donor Day, World Immunization Week, World Tuberculosis Day, Day, World and World Hepatitis Day. (1) Since 1995, the President of the United States has made an official proclamation on World AIDS Day.

As of 2013, AIDS has killed more than 36 million people worldwide (1981-2012), and an estimated 35.3 million people are living with HIV, (2) making it one of the most important global public health issues in recorded history. Despite recent improved access to antiretroviral treatment in many regions of the world, the AIDS epidemic claims an estimated 2 million lives each year, of which about 270,000 are children. (3)

World AIDS Day was first conceived in August 1987 by James W. Bunn and Thomas Netter, two public information officers for the Global Programme on AIDS at the World Health Organization in Geneva, Switzerland. (4)(5) Bunn and Netter took their idea to Dr. Jonathan Mann, Director of the Global Programme on AIDS (now known as UNAIDS). Dr. Mann liked the concept, approved it, and agreed with the recommendation that the first observance of World AIDS Day should be 1 December 1988. (6) Bunn, a former television broadcast journalist from San Francisco, had recommended the date of 1 December believing it would maximize coverage of World AIDS Day by western news media, sufficiently long following the US elections but before the Christmas holidays.

In its first two years, the theme of World AIDS Day focused on children and young people. While the choice of this theme was criticized at the time by some for ignoring the fact that people of all ages may become infected with HIV, the theme helped alleviate some of the stigma surrounding the disease and boost recognition of the problem as a family disease.

Each year, Popes John Paul II and Benedict XVI have released a greeting message for patients and doctors on World AIDS Day.

In the US, the White House began marking World AIDS Day with the iconic display of a 28-foot AIDS Ribbon on the building’s North Portico in 2007. (16) The display, now an annual tradition, quickly garnered attention, as it was the first banner, sign or symbol to prominently hang from the White House since the Abraham Lincoln administration.

Each World AIDS Day campaign focuses on a specific theme, chosen following consultations with UNAIDS, WHO and a large number of grassroots, national and international agencies involved in the prevention and treatment of HIV/AIDS. As of 2008, each year’s theme is chosen by the Global Steering Committee of the World AIDS Campaign (WAC).

For each World AIDS Day from 2005 through 2010, the theme was “Stop AIDS. Keep the Promise”, designed to encourage political leaders to keep their commitment to achieve universal access to HIV/AIDS prevention, treatment, care and support by the year 2010. (7)

As of 2012, the multi-year theme for World AIDS Day is “Getting to Zero: Zero new HIV infections. Zero deaths from AIDS-related illness. Zero discrimination.”

The themes are not limited to a single day but are used year-round in international efforts to highlight HIV/AIDS awareness within the context of other major global events including the G8 Summit, as well as local campaigns like the Student Stop AIDS Campaign in the UK.

Another interesting line of research is a potential cytomegalovirus (CMV) vaccine being worked on by Oregon Health & Science University, which could one day be used to both prevent and cure HIV.

The vaccine uses HIV genes packaged inside a vector (a shell of protein derived from the envelope of another virus, in this case cytomegalovirus).

Instead of preventing the spread of HIV, the vaccine stimulates a strong, broad immune reaction that means virus replication is almost completely suppressed, and any infected cells eventually completely clear from the body.

At the moment, the vaccine is only being tested on monkeys infected with Simian Immunodeficiency Virus (SIV – the monkey version of HIV) and 60% are responding to the vaccine, with almost all of them losing every sign of viral infection.

And even when the scientists found one copy of SIV DNA buried deep in the follicles of lymph nodes in a monkey and then injected these virally-infected cells into monkeys that had responded successfully to the vaccine, they still didn’t get infected from these new cells.

“These worrying figures illustrate the need for keeping up the momentum in the fight against HIV/Aids.”

With things as they stand, research into preventing and curing the disease has never been more urgent.

“One of the very important things we’re doing is focusing on a cure. I’m not sure that’s going to happen next year, but I think we’re getting closer and closer and I think that’s very important,” Ton Coenen, executive director of the Aids Fonda and STI AIDS.

“The other is about scaling up treatment and prevention.”

Gus Cairns, the editor of NAM Aidsmap, an independent source of information on HIV/Aids news, agrees that a complete cure for the condition could still be a long way off.

“Curing HIV will be much more like curing cancer than curing a normal viral infection. You basically need to find every single cell in the body that is infected with HIV and kill it. That’s a big ask, as many hide from the immune system,” he tells IBTimes UK.

“HIV/Aids treatments will continue to get more tolerable and effective but we need something that enables people to stop having to take drugs for the rest of their lives.”

So what are some of the approaches towards a cure and prevention of HIV/ Aids? IBTimes UK looks at some of the most promising research.

What should I do on World AIDS Day?

World AIDS Day is an opportunity for you to learn the facts about HIV and put your knowledge into action. Find out how much you know by taking our online quiz: Are you HIV aware? Test your knowledge and awareness by taking the quiz and act aware by passing the quiz on and sharing it with your friends on Twitter and Facebook.

If you understand how HIV is transmitted, how it can be prevented, and the reality of living with HIV today - you can use this knowledge to take care of your own health and the health of others, and ensure you treat everyone living with HIV fairly, and with respect and understanding. Click here to find out the facts.

You can also show your support for people living with HIV on World AIDS Day by wearing a red ribbon, the international symbol of HIV awareness and support.

World AIDS Day is also a great opportunity to raise money for NAT (National AIDS Trust) and show your support for people living with HIV. If you feel inspired to hold an event, bake sale or simply sell red ribbons, click. If you’d like to see what other events are taking place — click here and find out more.

But what about after World AIDS Day?

Although World AIDS Day is a great opportunity to get the public talking about HIV and fundraise, we need to remember the importance of raising awareness of HIV all year round. That’s why NAT has launched HIV aware - a fun, interactive website which provides all the information everyone should know about HIV. Why not use what you have learnt on World AIDS Day to Act Aware throughout the year and remember, you can fundraise at any time of year too - NAT is always here to give you suggestions and ideas.

If you blinked, you may have missed some of the ways HIV has changed.

The science of HIV is constantly evolving, and what we knew (or thought we knew) just a few years ago is either incorrect, incomplete or in need of an upgrade. Every year we learn more about the virus, and research keeps giving us new tools to prevent, test and treat it. Read more...

Please feel free to republish the article in your organization’s print or electronic publication, or link directly to it on our site. 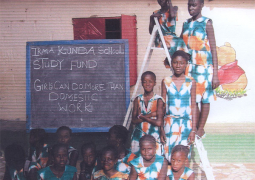