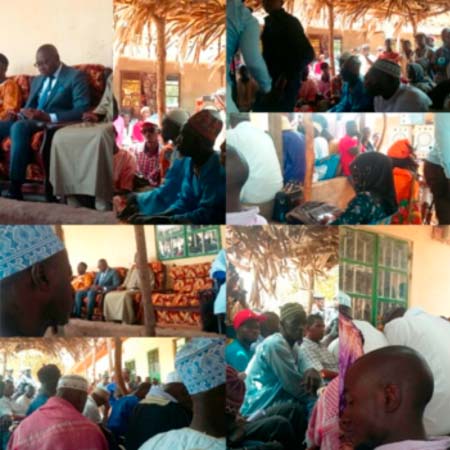 Interior Minister Mai Ahmad Fatty has called for peace and tranquility in Sibanor village in light of recent clashes between a group of the former ruling APRC party supporters and militants of the United Democratic Party (UDP).

The minister made this statement yesterday in an emergency stakeholders’ security summit at Sibanor village.  The gathering brought together district chiefs, alkalolou, governors and community leaders and youth activists.

“Let’s maintain peace and harmony in the new Gambia; Adama Barrow is the new president and we have to accept the government of the day like in previous times,” Mr Fatty said, adding that people, irrespective of political affiliation, need to work together for the benefit of The Gambia.

He further urged the people of Foni Bintang to maintain law and order at all times as the new Gambia is headed by people who are bent on maintaining, safeguarding and upholding of the rule of law to the fullest.

The minister thanked the Police Intervention Unit for their swift response and also thanked the heads of communities and villages for responding to the call of reconciliation in Sibanor.

Fatty told the gathering that the defeated UDP candidate of Sibanor, Foni Bintang constituency, Assan Jobarteh, has been selected by Adama Barrow as one of the five nominated members in the National Assembly.

“The president has selected Assan Jobarteh as a nominated member; the people of Foni Bintang are lucky because you have two representatives in the National Assembly and this should bring you even more together,” he said.

In his remarks on the occasion, the minister of local government and lands, Lamin Dibba called on the people of Foni to drive the spirit of tribal politics out of The Gambia as it is very destructive to the development of any nation.