The issue of alcohol drinking by children is often seen as a problem, and now a concern for the Ministry of Youth and Sports.

Underage drinking is now becoming common, and is seen as a major problem by many people, including the authorities.

What we keep on asking is where were the parents of these minors buying, and probably consuming these alcoholic drinks.

Parents must help to prevent those under the age of 18 from purchasing or consuming alcohol, since it is not helpful to their health and overall well-being.

We are calling for special school education programs aimed at convincing students to abstain from drinking alcohol, both now and as adults.

We believe that with such programs we can make concrete achievements in addressing the issue, which is now becoming a problem.

Since alcohol consumption could lead to marijuana use, which leads to cocaine and other hard drugs, it is high time we worked hard on addressing the problem by introducing drastic measures.

Just last week, the Ministry of Youth and Sports reacted to what it called the rampant and indiscriminate sale of alcoholic drinks to minors, including school children by certain unscrupulous business concerns in the country.

According to the ministry’s dispatch, research findings have revealed that the drink contains 40% alcohol.

It is being sold in sachets at a price of D3 per sachet.

Consequently, it is easily affordable, and available to minors.

Since our children learn from observing our behavior, and we are the most significant role models in their lives, we should, therefore, learn to be good role models.

If we drink or abuse alcohol, we can’t expect our children not to follow in our footsteps, since we are just setting a bad example for them.

We urge the Ministry of Youth and Sports to collaborate with the office of the Inspector General of Police so as to address the problem.

Despite having a free market policy in the country, it does not mean people can sell anything to our children or the general public.

The health and progress of the young people of the country, in particular, should not be compromised under any circumstances.

Gambia Federation of the Disable held its third congress 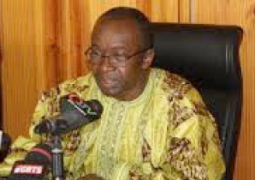 CRC extends deadline for submission of comments on draft constitution