The students of Insight Training Centre over the weekend embarked on a research trip to Juffureh to compare what they learned in their Gambian Studies lectures with what is now left of Kunta Kinteh Island, the museum as well as the home of Kunta Kinteh, as the country marked the International Roots Festival.

The trip was organised by the Insight administration in collaboration with the Insight Students Union, and brought together more than ten students from various departments doing Gambian studies, to explore what is now left of Kunta Kinteh Island, the Kinteh Kunda Family home, as well as other historical sites in relation to the Atlantic slave trade.

Ms Halimatou Ceesay, president of Insight Training Centre Students Union, said the trip was the brain-child of the union, which deemed it necessary to select students from various fields of study, bring them under one umbrella and embark on a research trip that they would document with the support of the school administration for students to benefit from it.

She said looking at the participants, they were mainly people who stayed around the Kombos and never had the opportunity to go, see and learn the ways of the rural people, particularly in the villages and historical sites that had something to do with the slave trade.

The students were very excited and gained a lot from the trip, and some were emotional after seeing the way and manner that their forefathers were treated in the hands of the colonialists.

She added that someone without culture is lost and has nothing to show off to the world, and that was why it was important for students to often visit historical sites to avail themselves the opportunity of knowing who they are, and where they came from so that they would learn to value themselves.

She thanked the school administration for supporting the initiative. Insight Training Centre is a student-friendly environment that always supports educational initiatives brought forward by the students union; and that was why they always call Insight a ‘Happy Family.’

Sharing their impressions with regards to the sites visited, the union’s information minister, Omar Sanyang, said the trip was successful and, as students, they have seen a lot which would have a great impact on them as Gambian Studies students.

He said Gambian Studies is all about knowing yourself, culture and country which is what history is all about.

He said anytime one visits Juffureh, there is always something new to learn and what they have gain during the research trip would go a long way in helping them, as well as those students that would come after them because it would be well-documented.

Biran Bah, vice president and minister of Female Students Affairs of the union, said the trip was nice and peaceful and was one way that could bring students together.

Every student at Insight is working and, therefore, bringing them together after lectures was not easy, and the research trip was one way of doing that.

He added that sometimes students may not understand explanations, but if what they are taught is right there in front of them and this way they would easily understand.

This was the beginning as far as the research is concerned and, since charity begins at home, they decided to start at Juffureh at a time when the country is celebrating another Roots festival.

He, therefore, urged the students to take Gambian Studies seriously, because one could not do without culture.

Bah added that the trip was an exciting one, as this was his first trip to Juffureh and one that he would always remember.

Rose Gomez, a journalism student at Insight, said the trip was delightful and it brought together students from different backgrounds to live and sleep together at one place, different from their various homes.

On arrival at the Island, it gave her the comprehension that the Europeans had stolen a lot from us, and it was time for them to go back there and take it back.

“We cannot do without education and education is the weapon that we can use to take what belongs to us.”

Aji Darboe, another student, said the trip was very exciting and important as well.

She had seen what it was like for her forefathers, and it helps bringing her closer to her roots and culture as a Gambian; and she had learned so many things about Juffureh itself and its satellite villages that were all affected by the slave trade.

When she goes back, she would comfortably share her experience with her fellow students and family about the historical sites.

She was also very emotional when she saw the place in which the slaves were kept, on an isolated island surrounded by water; and the way their forefathers suffered in the hands of the white people.

Paul Steven Preira, minister of Arts and Culture of the union, said this was his first time to go out on such a research trip, as he never had time to go on a school trip.

He said this was also his first time to be on a boat, and cross the river to the island and that was why he was even hesitant to enter the boat.

He said he had doubts before getting to the Island, but now he could comfortably debate on the slave trade whenever a question on it is raised by the lecturers.

Preira added that they saw on the trip all that the lecturers told them in class. 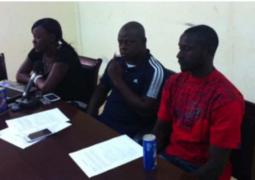