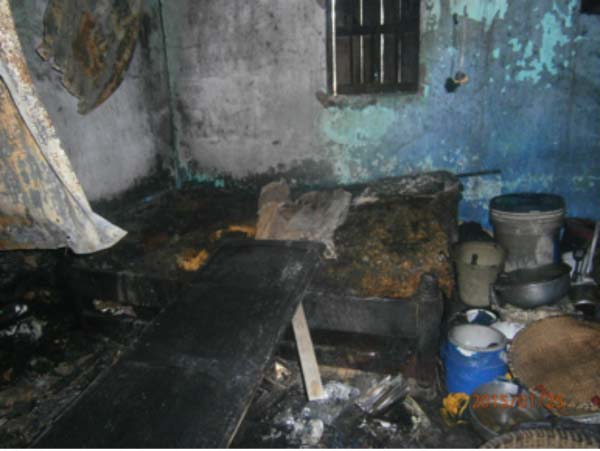 Four children were Saturday night burnt to death in a fire incident in LatriKunda German in the Kanifing Municipality.

Speaking to our reporter on Sunday after the incident, Momodou Lamin Njie alias Gass, said the incident happened on Saturday night around 11 pm to 12 midnight while the children were studying inside the room using a lit candle, as there was no electricity.

After studying, the children went to sleep and left the candle on, he said, adding that they later detected fire burning inside the room.

They tried to intervene, but could not have access into the apartment of a room and parlour, where the fire was raging.

They also attempted to enter the room through the middle door, but it was already engulfed by the fire.

They finally ventured through the main door and, before they could reach the children, the fire had already consumed them and everything in the room, Mr Njie narrated.

He also disclosed that it was four children who died in the inferno, the eldest among them was a Grade 9 student called Alex (16 years old), Saffie Joof (7 years old), and the other two children were from Banjul, who came to spend the weekend with the family.

He said the parents who were outside with otherpeople in the compound and the neighbourhood tried all they could to penetrate the room before the fire consumed everything inside it, including the children.

He added that by the time fire fighters arrived at the scene, they had already put out the fire with the help of the neighbours.

He said the family needs help from everyone, and they are pleading with the head of state, President Yahya Jammeh, and the nation, as well as the National Disaster Management Committee, to come to their aid.

“The parents of the children have nothing left in their house,” he said, adding that the bodies were yet to be buried, after the police investigations are completed.