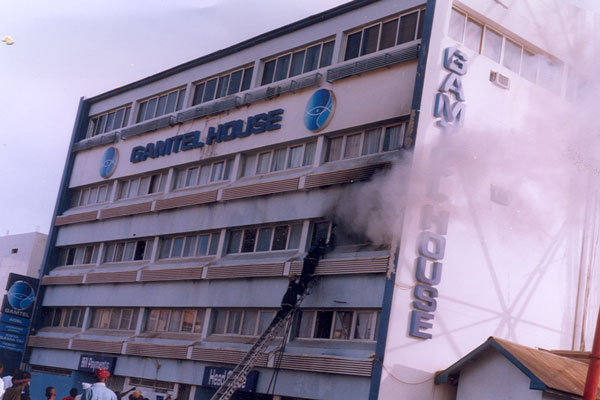 The Gambia's main telecommunications company, Gamtel on Monday afternoon experienced a fire outbreak at its headquarters in Banjul. Two of their offices were seriously affected.

Speaking to The Point yesterday at his Banjul office, Amadou Touray, Public Relations Manager at Gamtel, said before mid-day it was noticed that one of the fluorescent lights in one of the offices on the first floor blew and started emitting foul smells.

He stated that shortly before closing for the day, one of their security personnel, Muhammed Camara, called the personnel of the Fire and Ambulance Service to come and be on standby. He said shortly after their arrival, the fire started rising to the second floor of the building, and people as a result quickly started to run for safety.

He pointed out that at the moment investigations are going on to establish the cause of the incident.

Mr Touray thanked the personnel of the fire service and the general public for their intervention, the inspector general of police and the service chief, the SOS for Communication and Information Technology, the CEO of Gamtel and the chairman of the board for coming to their aid during the incident.

He finally assured the general public that their services are not affected.