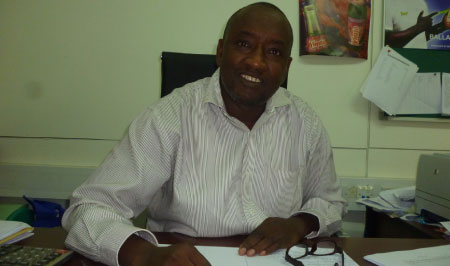 Bori Darboe, a member of the Lower River Region Organization Committee, who also doubles as the marketing manager of Banjul Breweries, has called on the Normalization Committee of the Gambia Football Association (GFA) to step down because “they are not capable of taking Gambian football anywhere.

Mr Darboe made these remarks in an interview with reporters in his office in Kanifing yesterday.

The Gambia have failed in the continental senior and cadet competitions under the Normalization Committee’s era, Darboe noted.

He therefore seized the opportunity to call on them to step down and also calls for an Annual General Meeting to elect a new executive that will run the affairs of Gambian football.

During the time of Seedy Kinteh, Darboe noted, The  Gambia was doing “extremely well” in the continent cadet competitions and won the championship in 2005 and 2009 and the U-17 also beat Brazil 3-1 in the 2005 FIFA U-17 World Cup hosted in Peru.

Darboe also blamed the Ministry of Youth and Sports for letting go the former GFA executive and bringing in people who “cannot take Gambian football anywhere” because they were there before and could not promote Gambia sport to any level.