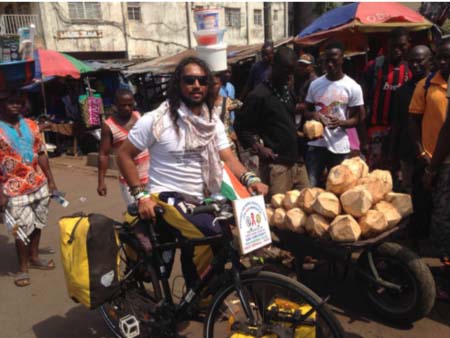 Somen Debnath, an Indian national, is cycling the world and spreading HIV/AIDS awareness, as well as the Indian culture.

The Gambia was the 120th country he visited on his “around the World Bicycle Tour Programme and Seminars on Indian culture and raising awareness on HIV/AIDS.”

Speaking to The Point on Friday, Somen Debnath said his cycling tour around the world started on May 2004 after acquiring his Bachelors of Science degree in Zoology at the University of Calcutta.

He had also obtained the Visarad degree in fine arts at the University of Sarbabhartiya, Calcutta, West Bengal, India.

So far, he had travelled through 120 countries including The Gambia, and completed 129,300 kilometers on his bike trip.

“In 2012, I entered Africa from Morocco and in 2012 to 2015, I travelled to most African countries and the Middle East; then from Guinea Bissau I came to The Gambia.”

“I arrived in The Gambia, and I will stay for five to seven days and I would like to visit different schools, colleges and universities for HIV/AIDS awareness, and also convey the message of peace and humanity and brotherhood with Indian culture.”

He said he is also going about teaching the Indian culture and also learning about different cultures.

He said he had learned different languages as he entered different countries, so as to get close to people and to understand them.

“The whole world is my university, and all the people are my teachers; so every single moment I am learning something new from each and every person, and I respect that.”

He said that during his journey he has met many presidents and prime ministers, adding that it was an honour meeting with the president of a country.

“I was captured by Taliban for 24 days in Afghanistan, 6 times robbed in central Asia, 8 times beaten by skinheads, living with wild animals such as rhinos, elephants, cheetahs, and pythons.”

He said he lived with the most ancient Jarawa tribe in the Andaman and Nicobar Islands, and it was really challenging but again people supported him.

“Life is a great lesson; so we are learning from this lesson to make our life better and that is the way we can make a change, and I believe each and every person has a responsibility to make his or her life better,” the Indian cyclist said.

“I will continue to Dakar and from there to Mauritania - Western Sahara, then to Brazil and then to other countries; so the tour will finish 27 May 2020,” he disclosed.