The Plant Protection Service under the Department of Agriculture on Wednesday held a daylong inception workshop for the integrated pest management project at the Kairaba Beach Hotel.

The forum was funded by the Food and Agriculture Organisation which provided D20.4 million to support the Ministry of Agriculture for the integrated pest management on the whitefly.

Speaking on the occasion, Sheriffo Bojang, deputy minister of Agriculture, said that the Ministry of Agriculture is “exceedingly proud and pleased” to hail the noble initiative that FAO has taken to collaborate with the relevant stakeholders to salvage The Gambia from the attack of whiteflies.

“This is the first proposal to control whiteflies on large scale in The Gambia,” he said.  “It is consistent with the country’s medium term plans on poverty reduction and food security.”

According to him, whiteflies, particularly the spiraling whiteflies, are alien pests in The Gambia but their population is currently massive and their spread has reached an undesirable proportion that appropriate action should be taken against them.

The FAO country representative, Mariatou Njie-Faal, said whiteflies originated from Central America and the Caribbean but they are now widespread in West Africa.

She said the effects of whiteflies are devastating on fruit trees, vegetables and ornamental plants; they could result in economic loss to farmers and communities.

The FAO official said whiteflies threaten the livelihood and food security of communities.

Madam Njie-Faal pointed out that the whitefly infestation in the West Coast and North Bank regions of The Gambia is already reaching significant proportion.

“There is high risk of the insect pest spreading to new locations in The Gambia and to neighboring countries if preventive measures are not swiftly put in place,” she said.

During the 2004-2005 locust invasion in The Gambia, FAO supported the Ministry of Agriculture to deliver plant protection services by providing equipment, vehicles and hired aircraft to control the locusts.

Most recently, the agency supported the strengthening of the national phyto-sanitary capacity of The Gambia.

Economywatch: A sigh of relief

‘Justice is a fundamental Human Right’ 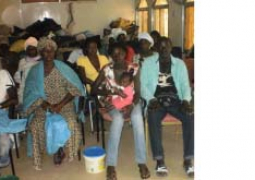