Inspector Ebou F. Badjie, a police officer attached to the fraud squad, yesterday testified before Magistrate James George of the Banjul Magistrates' Court in the trial of one Saidy A. Sowe.

The accused, Saidy A. Sowe, is standing trial for allegedly making libel and giving false information against Yankuba Touray. He denies the charges.

Inspector Badjie further told the court that the accused was contacted and he came to the fraud squad office where he was confronted with the petition he wrote to the Office of the President. He said a cautionary statement was obtained from the accused in respect of the allegation and the accused wrote his own statement. He said, according to the petition, the accused indicated that his former bar and restaurant called El Mondo was forcefully seized from him by Yankuba Touray the then Secretary of State for Tourism and sold to Lang Conteh. Both the petition and cautionary statement were tendered in court as exhibits respectively.

Count 1, the particulars of the alleged offence, revealed that in the month of October 2008, in the city of Banjul, with intent to expose Yankuba Touray to hatred, contempt, ridicule or damage to his profession or reputation, the accused Saidy Sowe made a false allegation in a written petition to the Office of the President that part of the proceeds derived from Destiny Night Club was for the said Yankuba Touray and thereby committed an offence.

While on count 2, the alleged offence, states that some time in the month of October 2008, in the city of Banjul, the accused Saidy Sowe presented a petition to the Office of the President, State House, claiming that El Mondo Bar and Restaurant was illegally taken from him by Yankuba Touray the then Secretary of State for Tourism, which he knew to be false or does not believe to be true, and thereby committed an offence. 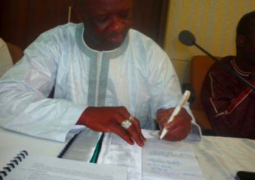