Sheriff Jammeh, the president of the Gambia Lawn Tennis Association and contestant in the March 23 Gambia National Olympic Committee (GNOC) election, has called on his opponent and current GNOC president, Momodou Dibba, to respect the letter and spiritthe six-point agreement he signed last year as a road map to end the GNOC dispute.

“This agreement has made it clear in the 6th clause that the present leadership should be prepared to hand over the management of the GNOC to a younger generation. This means simply that Dibba and company should not contest, but instead supervise a free and fair election for a new executive,’’ Jammeh said.

He also said that the six-point agreement came to replace the Sports Tribunal report, which even recommended that Dibba and other officials be banned from holding office.

According to Mr Jammeh, any decision by Dibba and camp to contest would be in violation of the agreement and, therefore, detrimental to the unity and development of sports as envisaged by the Sports ministry.

“I think we shall all be honest to what we agree and show integrity in everything we do, especially if we are serving the interest of the nation,’’ Jammeh said.

He concluded by saying that the desperate tactics ofdisqualifyingfully functional nation sports associations on the flimsy excuse of  IOC advise is an insult to the sovereignty of The Gambia, in whose interest the GNOC should work  and not against.

Mr. Jammeh reiterated his belief that the GNOC leadership is using and hiding behindthe IOC Charter, as well as taking refuge in internationalizing local issues to hold the will of the Gambian people to ransom.

Mr. Jammeh further emphasised that the six-point agreement was in fact supervised by the Minister of Justice Lamin Jobarteh, and witnessed by the lawyer of the GNOC Ida Drammeh at the Ministry of Justice, with all parties agreeing to go by it.

Responding to these claims, the GNOC incumbent Mr. Dibba said he will contest the GNOC elections on March 23, as there is no age limit which bars anyone from contesting based on old age.

“In fact, according to the IOC, one is qualified to contest as long as one is not 90 years old,’’ he said.

Dibba said that aside, his administration has every reason to enjoy the current support it enjoys from the majority of the GNOC-affiliated associations, because they have seen that his regime has proven to be  the most efficient for a long period in the life of the GNOC, as evident from the numerous developments witnessed in the activities of national associations.

Asked if he is not violating the six-point agreement by insisting to contest, Dibba said the agreement is not binding on the GNOC as it is only a road map to  bring resolution to the political problems of the GNOC.

“It did not say that we should quit, but says we shall work on a succession programme, and that is exactly what we are doing.”

Every organization needs an experienced hand to effectively run it. If you look at age brackets in the GNOC you can see that even our composition suggest we are working on a succession to younger generations,’’ he said.

Mr. Dibba was also asked whether disqualifying associations and basing it on IOC advice was not a ploy to block participation of associations opposed to his candidature.

‘Not all the entire electoral list was approved by the IOC, who advised us who is qualified to vote in our elections, and that is how the voter list was determined,’’ he replied.

On the case of weightlifting which maintained that their supposed suspension from the IWF is, in fact, yet to come into force pending ratification by the  IWF executive board, Mr Dibba said it was the IOC who advised that the Gambia weightlifting association was not qualified at this moment.

He concluded by stating his willingness to work with government, through the ministry of Sports and all national associations to promote and develop the Gambian athletes to achieve excellence in sports without discrimination.

Meanwhile, Sports minister Alieu Jammeh Tuesday vowed to implement the six-point agreement, leading analysts to believe that the resolution to end the impasse might have to depend on his office’s action or lack of it. 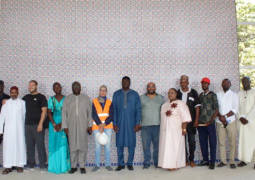