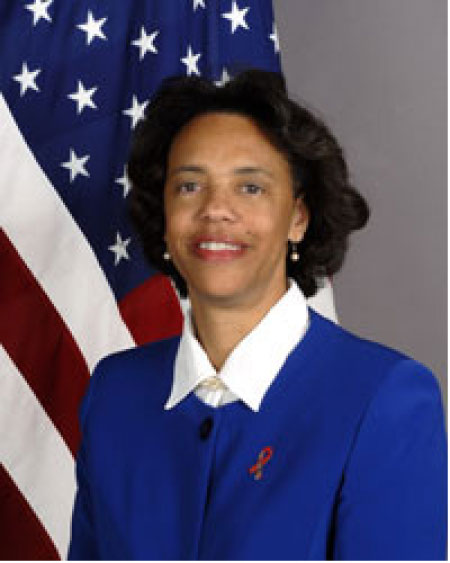 US Senior State Department Official, Deputy Assistant Secretary Marcia S.B. Bernicat who was on a day’s official visit in the country, on Wednesday addressed a group of young Gambians.

Bernicat addressed the youth on issues relating to youth and women empowerment at the American Corner located at the Comium Building along Kairaba Avenue.

A native of New Jersey, Ms. Bernicat has a BA degree in history from Lafayette College, and worked for Procter and Gamble before earning her MSc from Georgetown University in 1980.

Speaking at the ceremony, the US Ambassador to The Gambia, Edward M. Alford, said he knew the US official for a number of years.

He revealed that she is a US foreign service officer and that she served as Ambassador to Senegal, adding that she was chief desk officer for South-Asia, among others

According to him, she has much to do with planning who they hire, and how they develop them to make sure they have personnel, they need to meet the challenges of tomorrow.

Speaking to the youth, the US deputy assistant secretary also gave her background, including her educational career and job experience.

Bernicat joined the US State Department in 1981. At the time, there were not many women officers

Thirty-two years later, she had served in Africa, Europe, Caribbean and South-Asia, and while serving as Ambassador to Senegal, visited The Gambia many times.

Responding to various questions, including about this year’s theme on International Women’s Day, and about the US, she said Secretary of State Hillary Clinton was very vigilant about the fate of women.

Bernicat also expressed delight about every dollar the American government gives in aid, saying “we want to help; we don’t believe that the world is a better place if everybody can’t live the way they should be.”

According to her, she spent more time in Africa, and had seen a lot of women doing incredibly well. She noted that in the US people talk about women being key to development.

She hailed US president Barack Obama, noting some of the projects Obama introduced such as the African Women Entrepreneurship Program and the African Youth Leadership Initiative.

She also cited about some of the most effective US foreign policy programs such as the Peace Corps and the exchange program on religious tolerance, good governance, and violence against women, among others, which she was pleased about.