As we peruse the Old Testament, we come to terms with the fact that God’s standards are pitched high on perfection and nothing less. The 10 commandments remind us constantly that we cannot match up because of our frail human nature that is ridden with sin. “For all have sinned and fall short of the glory of God.” (Romans 3:23)

Because of their shortcomings, God dealt with His servants with a heavy hand. The Bible teaches that those to whom much has been given, much is expected. (Luke 12:48b)

Moses was God’s friend. “The Lord would speak to Moses face to face, as a man speaks with his friend.” (Exodus 33:11) At one time, he spent up to 40 days in his presence. What a privilege! Yet Moses committed a serious error when he hit the rock – to get water for the thirsty Israelites - when God had told him to speak to it. “Because you did not trust in me enough to honour me as holy in the sight of the Israelites, you will not bring this community into the land I give them.” (Numbers 20:12) He kept his job all right but a severe sanction fell on his head. He would see the Promised Land but he would not enter it. Moses tried to talk God out of it but did not make any headway. God was categorical about the decision He had taken. “That is enough, do not speak to me anymore about the matter.” (Deuteronomy 3:26) was God’s final word. Moses therefore came up to the threshold of the Promised Land; in fact he could see it in front of him but was denied entry. May this not be our portion!

Unfortunately, this will be the lot of all those who choose not to heed God’s word; who would like to go it their own way. God is not a respecter of persons. We are all equal in His eyes; our social status is no license for disobedience. God has His set rules that must be honoured at all times, if we want to accede to His manifold blessings.

If there was anyone to top the honour’s list of those who should have entered Canaan, it was Moses for sure. Yet, God disqualified him. If Moses was so close to God and could not make it, how about us? Isn’t that disturbing?

Eli, as high priest, had a heavy responsibility towards the community he served. No doubt most people looked up to him. Unfortunately, he was unable to keep his house in order. He downplayed his role as a mentor and role model for his sons who lived a wayward existence.

The axe fell on his head and not on that of his children, because it was his duty to raise them. Speaking through young Samuel God transmitted: “I would judge his family forever because of the sin he knew about; his sons made themselves contemptible and he failed to restrain them. Therefore, I swore to the house of Eli, ‘the guilt of Eli’s house will never be atoned for.” (1 Samuel 3:13-14)

Parents, it is our responsibility to provide sober Christian upbringing for our children; to stand firm despite all of Satan’s attractive baits seeking to destroy us. The rising indiscipline and violence evident in society, is a clear sign that we have been negligent in our responsibility towards God and humanity. Our children have become wayward in diverse respects and have become easy prey to the ‘looseness’, and laissez-faire habits and practices prevalent in our world today.

A Syrian army general named Naaman, was plagued with leprosy; it made him look awkward in view of his social status. He had to travel to Jerusalem in search of a renowned prophet whom he heard could provide a cure. He had come with some gifts to offer to the prophet but the latter had declined the offer, even after healing him. However, his disciple Gehazi, had coveted the gifts and he chased Naaman after the latter had left, to say that the prophet had changed his mind and was now willing to accept the gifts.

Little did Gehazi realise that his spiritual father had seen it all in his spirit. Then to add insult to injury, when questioned about his whereabouts, Gehazi lied. He had put material things over his calling and had to pay the price. “Is this the time to take money, or to accept clothes, olive groves, vineyards, flocks, herds, or menservants and maidservants?” (2 Kings 5:26) Prophet Elisha cursed him and he became a leper also.

What’s on your mind? Material or spiritual things? Eternity? Gehazi schemed to obtain material things that the general had brought with him but which the prophet had declined. His desires were earthly when they should have been heavenly. He failed to look to the things that matter in life and fell for the ordinary.

In Ephesus, where the apostle sojourned during his missionary journeys, people received healing and demons were cast out. The seven sons of a Jewish high priest however joined others that took the miracles that Paul performed very lightly. So, they went around trying to drive spirits by invoking the name of the Lord Jesus over those who were demon-possessed. “They would say in the name of Jesus, whom Paul preaches, I command you to come out.” (Acts 19:13)

For the sons of Sceva unfortunately, things turned sour. “One day, the evil spirit answered them. ‘Jesus I know, and I know about Paul, but who are you?’”The man with the evil spirit reacted violently, attacked and overpowered them all. “He gave them such a beating that they ran out the house naked and bleeding.” Their foolish action could have cost them their lives. When the news broke out, fear seized many. From then, “the name of the Lord Jesus was held in high honour”.

Have you been flirting lately with the name of the Lord Jesus? Please amend your ways. For the name of our Lord Jesus is the name above all other names. At His name “…every knee shall bow, in heaven and on earth and under the earth, and every tongue confess that Jesus is Lord...” (Philippians 2.10) 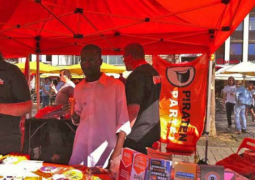