The ILO was established in 1919 by the Treaty of Versailles, France and become part of UN as it is the oldest specialized agency and was funded to promote fairness and dignity at work for women and men and social justice for all.

In his welcoming Remarks, Hon Abdou Colley, Minister for Trade Industry and employment told participants that ILO was founded in 1919 with the mandate to promote fairness, and social Justice for all noting that the event is celebrated through out the world by member states.

According to Minister Kolley, the forum is to dialogue and focus an global economic down turn among other relevant issues.

For his part, Mr. Ebrima Garba Cham, representative of the Trade Union said since the foundation of the ILO in 1919, International Standards have always been its fundamental means of action for the promotion of social justice. He said the objectives pursued remains the general improvement in the conditions of human being at work through the standard - setting instruments.

The systematic use of standard, Mr Cham went on, is to protect human right at work, which is characteristic of the ILO.

Dilating on the achievement made by his Union, he said salaries and wages increase for both public and private sector, tripartite representative and reporting to ILO and national level, twelve thousand three hundred settle cases on wrongful redundancies, dismissal and termination, and also injuries compensation, protection of intellectuals properties among others.

Deputizing for the UN resident coordinator in the Gambia, Mr. Chinwe M. Dike, Madam Janis James, Economic Adviser dilated on the work of the ILO over the years, sighting its mission of improving the situation of human beings in the world of work as primary goal to promoting opportunities for women and men to obtain decent and productive work, in condition of freedom, equality security and human dignity.

According to Madam James, work can only be considered decent if it meets four condition which she said are; employment, social protection, Fundamental rights, and social dialogue.

"These four conditions for decent work are set out in ILO conventions as policy agenda to achieving this goal, these are International conventions that define and uphold the rights of employees and employers, one of these convention stipulates that government are obliged to implement sound employment policy" she emphasized. Madam James however informed the gathering that, the promotion of decent and productive work is one way of helping to alleviate poverty and reduce inequality.

The event was graced by Hon. National Assembly members as well as the partners and media. 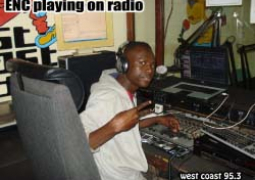