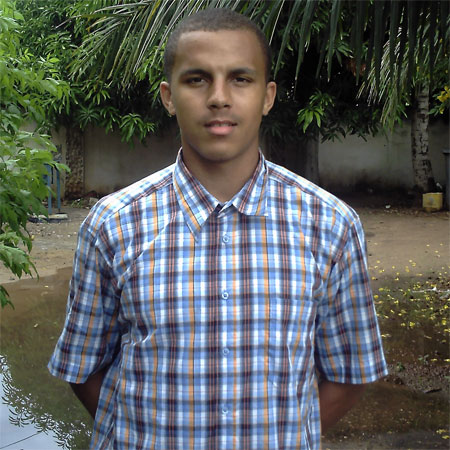 Born in the Republic of Germany to a Gambian father and a German mother, Sainey Sidibeh, a young versatile midfielder, has finally seen his dream come true after he was accepted to play for The Gambia national U20 team.

Sainey Sidibeh is the son of Lamin Sidibeh, a Gambian born in Kudang Village and Jarry Sidibeh a German residing in Hamburg Germany. Sainey, Born on the 10th of July 1989 in Hamburg Germany, plays his football with VFL 93 a fourth division team in Germany.

Speaking to Pointsports, the young versatile midfielder could not hide his feelings describing how he was accepted to play for his father's native land after passing his trials with The Gambia U20 team. He said, " I am very happy to be part of the team. It was always a dream for me to play for The Gambia U20 team. I used to watch the Gambian team when playing on satellite, especially during the U20 Youth Championship in Canada." He added, "I really like the way the Gambian team plays football, it is physical and faster than the game in Germany." According to Sainey, "playing for The Gambia was always been a source of pride for me." Speaking to Pointsports, Buba Ceesay, a customs officer who is a friend of Sainey's father, said, "I facilitated the coming of Sainey to The Gambia to have a trial with the U20 team." He said that he is not disappointed with Sainey's performance.

Seedy Kinteh, president of The Gambia Football Association, told Pointsports, "Sainey is a fantastic player he is strong and physical the coach likes him. He will be part of his team against Ghana for the U20 championship in Rwanda 2009."

It will be recalled that The Gambia will be playing Ghana in September 2009 in the last game of the qualifying round for the CAF U20 Youth Championship.