A murder suspect yesterday told the Special Criminal Court presided over by Justice Ikpala that he shot his wife with three bullets, in order to put an end to what he said was his wife’s control of his garden.

Sheriff Abba Hydara, who was testifying before the court, explained that he has a garden with different varieties of fruit trees that he earned his living from.

According to him, for three years now, he could not benefit from his garden, because his wife “controlled everything”.

“Anytime I asked my wife about the proceeds of the garden, she would refuse,” he explained.

He added: “As a result, I shot her with three bullets in order to put an end to that.”

Hydara told the court that, according to what he learned from the Quran, inheritance was created by Allah, and somebody could only be inherited after his death.

He told the court that trying to inherit the property of a living person is an act of suicide. “They wanted to inherit my property while I am alive. Anytime I intend to talk to the deceased and her son, they will not listen to me,” Hydara told the court.

“Whenever I attempted to talk to her, she will never listen to me,” he added.

He further said that he and his wife were living apart, admitting that on the day he shot his wife, he did not exchange any word with her.

“All those children are not my biological children. The deceased had eight children, and they were all born in my house”, Hydara told the court, and went on to talk of “the negative thing they do to me, because the children were supporting their mother who was trying to confiscate my property.”

“PW3, Marab Hydara, was the most wicked child. Three years ago, I used to see him once in every 24 hours, and shake hands with him,” he told the court. He went further to say that PW3 later did negative acts that used to make him angry.

Still testifying, Hydara maintained that, if he had the chance, he would have killed all three of them.

“I am cool and relaxed, as if nothing happened. We shall go to the High Court (meaning the Day of Judgment), and I am not afraid,” Hydara added.

The case was adjourned until 14th January for judgment. 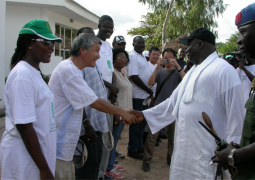