The case of housebreaking and stealing involving one Abdou Aziz Camara Wednesday continued at the Kanifing Magistrates’ Court with the testimony of the third prosecution witness, Bakary Darboe.

Testifying, Bakary Darboe told the court he is a police officer attached to Major Crime Unit and that he knew the first prosecution witness.

Officer Darboe adduced that he recognised the accused and could recall 4 October 2012, when he was part of the team that effected arrest on the accused person at Sanchaba Sulay Jobe in connection with housebreaking and stealing.

He said the accused was questioned for attempting to receive four bangles from the principal suspect, Ousman Nicole, and cash of D2, 500 he claimed was meant for payment given to him by the said Ousman.

He explained that when the accused was asked about the four bangles, he said it was given to him by Muhammed Lamin Khan (PW2), for safekeeping.

The accused was later escorted to PW2’s residence in Bakau where five bangles were recovered instead of four bangles, he said, adding that PW2 was arrested along with the accused person, and taken to their office.

He said they were cautioned and a cautionary statement was obtained from him.

Hearing was adjourned till 31 December 2012. 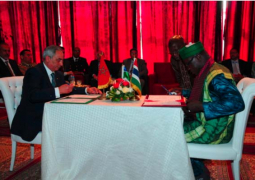