Security is a core concern of the American government’s Africa policy. This was made clear in May when President Obama proposed a $5 billion Counterterrorism Partnerships Fund to supplement programs the Pentagon already has in 35 countries. And it was made clear again at the recent U.S.-Africa summit in Washington, when Mr. Obama announced $110 million a year for an African Peacekeeping Rapid Response Partnership, a program to train and equip six African armies for peacekeeping operations.

Because Mr. Obama is committed to scaling back the deployment of United States troops to combat terrorism, America’s security strategy in Africa translates largely into training and equipping African armies. Although this approach rightly gives African governments the lead in tackling their own security problems, it is misguided nonetheless. It is, in effect, providing foreign tutelage to the militarization of Africa’s politics, which undermines peace and democracy throughout the continent. America’s diplomacy is becoming a handmaiden to Africa’s generals.

Consider two countries riven by different kinds of conflict and ask yourself what they have in common. On the one hand, there is South Sudan. By African standards, it is not a poor country. It has vast oil resources, and as soon it became independent from Sudan, three years ago, government spending per capita was about $350, four times the average for East African states. It also received the most generous international aid package of any country in East Africa — the equivalent of another $100 per capita. But the government spent about half of its budget on its huge army. And many of its 745 generals proceeded to make fortunes thanks to payroll fraud and procurement scams.

According to President Salva Kiir of South Sudan, $4 billion in public funds were plundered by government ministers. When Mr. Kiir shut out his political rivals from the club of kleptocrats, fighting broke out. Various commanders and party bosses then mobilized supporters through ethnic militias, bringing a sectarian dimension to a conflict that was inherently about the distribution of public resources.

Then there is Nigeria. Its political leaders, generals and businessmen — who are often all those things at once — have grown wealthy on oil money, while much of the population lives in deep poverty. Health and education services are inadequate, and the government faces widespread outrage about corruption. Small wonder that the Islamist militants of Boko Haram, who espouse austere forms of Shariah justice, are able to recruit disaffected young men and that the Nigerian army struggles to find combat-ready units to counter them.

Even as conventional military threats have declined throughout Africa, overall military spending on the continent has grown faster than anywhere else in the world. And these military budgets often hide big black holes. In Uganda, according to local journalists, some funds officially dedicated to the salary of army personnel who turned out not to exist have been used by President Yoweri Museveni to reward generals loyal to him.

When political crises occur, the American government’s response is to privilege military measures, and local governments know it. For example, the ongoing peace talks in South Sudan have focused more on dispatching Ethiopian, Kenyan and Rwandan troops under the auspices of the Intergovernmental Authority on Development, a regional organization, and less on addressing the root causes of the conflict. In the absence of a durable political solution to the underlying crisis, this is a high-risk move; it could suck the whole of northeast Africa into South Sudan’s war.

The overall approach violates the first principle of peacekeeping: Never send a peace mission where there is no peace to keep. The risks of getting embroiled are especially high when the troops deployed come from a neighboring country. What’s more, the very governments that propose to serve as mediators may have a conflict of interest: They stand to gain from dispatching their soldiers, especially if the mission is funded by contributions from United Nations members.

Counterterrorism assistance has a better track record reinforcing bad government than rooting out extremists. Repression by dictators like Idriss Déby in Chad or Blaise Compaoré in Burkina Faso has been tolerated because their governments have supplied combat troops for operations against jihadists in the Sahara. Meanwhile, Kenya has experienced more terrorist attacks since its army moved into Somalia in 2011 to fight the radical Islamist group Al Shabab. After the attack on the Westgate Mall in Nairobi last year, Kenya’s army and police indiscriminately targeted Muslim communities — generating resentment among those groups and potentially more recruits for the militants.

Fifteen years ago, when African leaders set up their own peace and security system within what later became the African Union, they tried to balance diplomacy and armed enforcement. In case of a conflict, they would hold negotiations with all parties; sending in peacekeeping troops would only be a fallback option. But Western countries like the United States and France have tended to favor military approaches instead. During the civil war in Libya in 2011, a panel of five African presidents, established by the African Union and chaired by Jacob Zuma of South Africa, proposed letting Col. Muammar el-Qaddafi go into exile in an African country and then setting up an interim government. But the plan was spurned by NATO, which preferred regime change by way of foreign intervention.

The Obama administration is aware of the dangers of supporting armed forces in Africa. At the U.S.-Africa summit in Washington, Mr. Obama announced a new Security Governance Initiative to help professionalize six African militaries and promote their being subjected to civilian oversight. This is a step in the right direction, but it is a very small step. Only $65 million has been earmarked for that program, compared with $5 billion for counterterrorism cooperation.

Washington has the means to do much more. A single aircraft carrier has a crew as large as the entire American diplomatic service posted abroad. The cost of developing the fleet of F-35 stealth fighter planes could fund the State Department, the U.S. Agency for International Development and all United Nations peacekeeping operations for nearly 20 years. Security in Africa will not be achieved by giving more power and money to African military forces. It will be achieved by supporting diplomacy, democracy and development.

“Fifteen years ago, when African leaders set up their own peace and security system within what later became the African Union, they tried to balance diplomacy and armed enforcement. In case of a conflict, they would hold negotiations with all parties; sending in peacekeeping troops would only be a fallback option. But Western countries like the United States and France have tended to favor military approaches instead”. 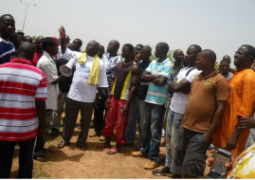