At the opening of business on Monday 29th July 2013, several money exchange bureaus along Kairaba Avenue in the Kanifing Municipality were closed.

Infact, many staff members of forex bureaus in the country have also been reportedly arrested.Even though some forex bureaus visited in the city of Banjul were seen opened, neither them nor the banks visited all over the capital city were having the CFA franc currency for customers to exchange for Gambian dalasis.

Consequently, people planning to travel to the neighbouring Senegal were forced to cancel their trips, since they could not access the CFA franc.

This development has come at a time when the government is trying to address inflation in the country, and the depreciation of the national currency, the dalasi.

In its latest move on the much-talked about foreign exchange issue, the presidency has announced that the exchange rate of the US dollar is with immediate effect fixed at a maximum of 37 dalasi.

In a statement issued late on Saturday, the Office of the President expressed concern over what it called the unwarranted hike in the exchange rate of the Gambian dalasi vis-à-vis other international currencies, notably the US dollar.

The hike, it said, is often instigated by unscrupulous and unpatriotic individuals who are bent on sabotaging the economy.

The presidency warned that this state of affairs is unacceptable, and as such ‘‘the exchange rate of the US dollar is fixed at a maximum of 37 dalasis to the dollar with immediate effect.’’

This suggests that there is a scarcity of the CFA franc in the banking system.

It is our humble submission that the solution lies in the fact that operators in the foreign exchange market must be allowed to operate freely, and the exchange rate of the dalasi be determined by market forces.

This is the economic doctrine that the Gambia government has adopted under the various structural adjustment programmes implemented over the years, and up to now under the present agreements with the IMF.

Such policies which allow the private sector to be the “engine of growth”, are what will encourage investors to put in their monies, and run foreign exchange bureaus as businesses which provide employment and revenue to the government through the taxes they pay.

Indeed, we believe the present exchange rate problem should be addressed with professionalism!

The country’s monetary authorities must be allowed to do their work, in line with the law which gives the Central Bank of The Gambia independence in determining monetary policy etc.

It is also our view that the state needs to show more consistency in its commitment to the economic policies it has subscribed to, in numerous agreements with the IMF and World Bank, etc. 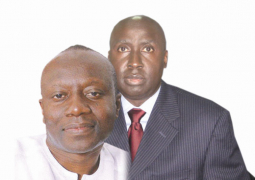