The Gunjur Youth and Sports Development Association(GYSDA) recently held its 3rd General Congress, at the premises of .

All affiliated members and delegates in Gunjur and its environs graced the congress. At the end of the congress, delegates re-elected the old executives into office to run the affairs of sports in Gunjur for another three-year term.

In his acceptance speech, the re-elected President of the committee, Mr Buba Bojang expressed GYSDA's readiness to support other sporting associations in Kombo South. He thanked the team delegates for honouring their invitation and used the opportunity to appeal to all participating teams to prepare well for this year's nawettan, which he added, would be different from the previous years.

The 1st Vice-President of the association, Faburama Darboe, claimed that the association will continue to promote and develop sports in Gunjur and its environs.

He appealed to the existing team delegates to put aside their team sentiments and contribute immensely and meaningfully towards the development of sports in Gunjur.

He further commended Musa Janneh, a native of Gunjur and now residing in the USA, for donating sporting gear to the GYSDA, and those who have in one way or another contributed to the success of Gunjur zonal team in the last zonal championship, in which Gunjur came out fourth and he said that lack of human resources and materials is a major constrains to association that they were unable meet their targets and express GYSDA's willingness in developing Nyamina football field only property of the GYSDA.

Other speakers included the Assistant Treasurer, Abdoulie Barrow, alias Abou Sallah and the Treasurer Buba Jatta, both of whom expressed similar sentiments. 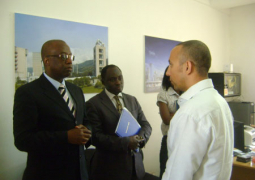