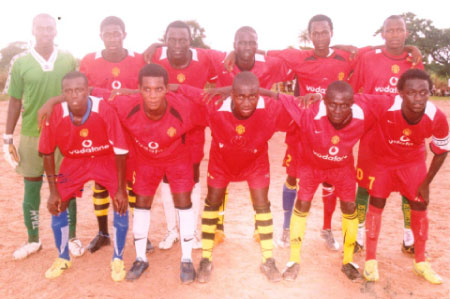 The defending knockout champions Manchester United FC were crushed out of the 2010-2011 Gunjur Knockout Championship following their 4-3 post-match penalty shootout defeat to Sebindinto FC, after a one-all draw in the regulation time at the Gunjur Nyamina Football Field recently.

Sebindinto opened the score through striker Mbaye Baboucarr Sumareh in the 60th minute of the game from a superb header to give his side the lead.

United fought back and levelled the score through midfield general Musa Sonko (alias Alexandra Pato) in the 70th minute of the game from a brilliant free-kick to make it 1-all.

This pushed the game into a post-match penalty shootout that ended 4-3 in favour of Sebindinto, who have now advanced to the second round of the competition, while Manchester United FC are out.

Elsewhere, Santos United FC have also been kicked out of the knockout following their 3-2 post-match penalty shootout defeat to Oxford United FC after a goalless draw in regulation time.