Magistrate James George of the Kanifing Magistrates' Court on the 4th June 2009 convicted and sentenced one Lansana Saho, a Guinean national, to a fine of D1, 800 in default to serve six months imprisonment for stealing.

The sentence was handed down after the accused pleaded guilty to the charge.

According to the charge sheet, on the 31st May, 2009, at Serrekunda Market, the convict stole a Nokia mobile phone valued at D13, 000, property of one Muhammed Camara.

After Inspector Fadera had narrated the facts of the matter, Magistrate George in his ruling told the court that the convict was a first time offender and had pleaded for mercy. He stated that what the convict did was bad, as his intention was to deprive the owner permanently of his mobile phone.

He advised the accused to desist from stealing and to find a decent job. He noted that the convict had shown remorse for what he had done and did not waste the court's time.

He ordered the prosecutor to return the mobile phone that was tendered, to its rightful owner.

Earlier, the convict in his mitigation craved the court's indulgence to temper justice with mercy and said he was ashamed and promised not to get involved in such acts in future. 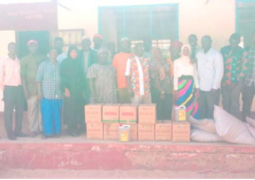