The Gambia Technical Training Institute (GTTI) student's union outgoing executive recently handed over power to the newly elected body at a colourful ceremony held at the institute grounds in Kanifing.

In his welcoming remarks, the outgoing president of the union, Morro .B. Ceesay, thanked the invites for honouring their invitation.

The event, according to him, marks another milestone in the democratic dispensation of the great institute were he and his colleague were sworn-in into variouspositions to handle the affairs of the students at the institute as student representatives.

Highlighting their achievements, Mr. Ceesay said the provision of a school bus for the students has immensely assisted in easing their transportation difficulties.

He added that at the July 22 beauty pageant 10 students of GTTI benefited from scholarship up to master degree level and he also thanked President Jammeh for his benevolent gesture in supporting the education of needy students.

The vote of thanks was delivered by Momodou Nyang. 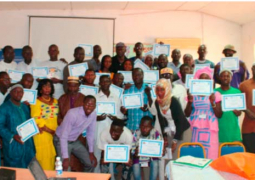