Guaranty Trust Bank Gambia Limited on Friday defeated by one goal to nil the team of the Insurance Association of The Gambia (IAG), which is comprised of insurance practitioners from various insurance companies.

Played recently at the Father Gough Sports Complex in Manjai Kunda, both the first and the second halves of the match were dominated by GTBank, who played the insurance practitioners like professionals against amateurs.

The insurers justified this by saying the bankers usually train together hence they have that collective fitness.

However, the banks in the country operate six days in a week while the insurance companies only operate for five days; so they have more days to train than the bankers.

The bankers scored their first goal in the 15th minute of play but this was ruled out by the central referee as off-side.

The first half ended goalless, as the bankers failed to take advantage of their numerous goal-scoring opportunities created.

The bankers came from the dressing room more eager to find the back of the net of the insurers.

They made intermittently wonderful inter-change of passes, coming close on many occasions, but the insurers put too much fight to stop them from scoring.

However, in the 6th minute of the second half, the bankers were awarded a penalty after the ball touched the hand of one of the IAG’s players in the six-yard box.

The bankers scored the penalty, which ended up being the only goal of the game.

The match ended one-nil in favour of the bankers.

The friendly encounter was organised by the IAG as part of the event marking the Insurance Awareness Week (11 - 16 February 2013).

The aim of the match was to socialise with partners to create room for better understanding between insurers, bankers and the society. 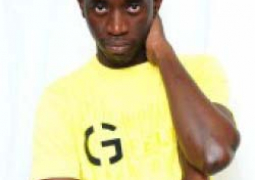