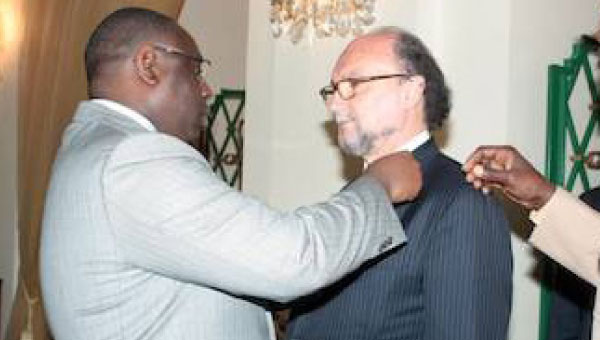 For the first time, in its 78-year history AIPS, International Sports Press Association, delegates from its African branch AIPS Africa received a presidential welcome and honour right in the city of black consciousness.

After a brief opening ceremony attended by top Senegalese government representatives for the delegates from 15 African countries for the extra-ordinary AIPS Africa congress, the journalists were guests at the presidential palace.

After taking turns to greet the effervescent Senegalese head of state President Macky Sall came the big moment when he decorated AIPS president with a knight of the order of merit (Chavalier d’ed Merit), a rare distinction for a leader who interestingly was voted as President across the border in Marrakesh, Morocco.

Gianni Merlo was quick to tell the president this is an honour for sports journalists the world over, and with it Senegal has shown the power of sport.

Preceding the meeting at the Palace, Sheikh Ababakarr Gaye, representative of the minister of communication, said the government of Senegal was proud to be hosting the meeting.

He praised the local press grouping ANPS as he catalogued the numerous achievements of the Association Nationale de la Presse Sportive du Senegal.

“Sports should be the vanguard in the fight against match-fixing and other problems facing sport,” as he buttressed on the AIPS President’s points, before officially declaring the meeting open on behalf of the minister “I wish you all a successful meeting here and hope that the outcome would revamp AIPS Africa,” Gaye concluded.

The Permanent Secretary at the Ministry of Sport, Tannor Nying, made similar comments.

Masimiliano Montanari of the International Center for Sports Security (ICSS) presented to delegates an introduction of the work of the Doha-based firm in countering terrorism and boosting security in sport, reminding journalists about their critical role in combating dangers to the future of sport.

He also spoke about organised crimes and related issues that pose serious threat to sports security saying action should be taken against that and other problems such as match-fixing.

Gianni Merlo, who in his opening remarks to the forum, complimented the efforts of the host nation in bringing together the African delegates.

He addressed some of the outstanding issues engulfing the sports media including the big threats of match-fixing and illegal betting. “We must be very strong in fighting these issues, and we should have knowledge about it and we need to show a lot of quality to fight it,” Merlo said.

The AIPS boss also stressed on the importance of developing the new generation of sports journalists in the continent urging AIPS-Africa to explore possibilities of creating opportunities for the younger colleagues whom he said will have a critical role in the future of the AIPS.

Two young reporters from Senegal, Rouguia Niane and Diacounda Sene, benefited from the AIPS Young Reporters Programme, he pointed out, saying the project will continue.

The extraordinary Congress of AIPS held in Dakar on 21-22 February 2013 has confirmed the holding of AIPS Africa Executive Committee elections at Sochi during the 76th annual AIPS Congress in Sochi (15-19 April 2013).

The Dakar’s extraordinary congress has adopted the following electoral procedures to be observed regarding Sochi elections:

1. Candidatures are submitted by national associations recognized by AIPS;

2. The electoral college is constituted by countries (regular AIPS members) represented in Congress (one country, one vote)

3. The election will be by list and the EC will be elected at simple majority

Support TFG to boost our economy

Helping the police to help us