Testifying before Magistrate Dayoh Small Dago, Neneh Njie told the tribunal that she is a banker, and that she knows the plaintiff.

According to the witness she was the plaintiff’s immediate boss at the bank, adding that appraisal is done every year in June for every member of staff, except those yet to be confirmed.

She denied that she was responsible for the plaintiff’s appraisal, and said appraisal is a process in their bank which consisted of the appraisee, appraiser, group head, MD and appraisal committee, who are all involved in appraising an employee.

“I was also involved in making recommendation for the plaintiff in terms of mastery of numerical and alphabetical letters, as I was her immediate boss,” the witness further revealed.

She indicated that her recommendation rating was not the final, but part of the process, adding that after her level, it goes to one Bolagi Ayodemi, whom she said is the General Manager and also served as operational and group head of the bank.

“I did not know who has the final say on the appraisal. Exhibit H only stopped at my own evaluation of the plaintiff’s performance, adding that it did not go through the group head and the MD.”

When told by her counsel, Mene, that the plaintiff earlier before the tribunal admitted exhibit H was her appraisal, the witness responded in the negative, adding that it was not completed.

She admitted that in 2009/10 the plaintiff appraisal rating by the MD was D, stating that she also undergoes the appraisal process annually.

Under cross-examination by the plaintiff’s counsel, Abdoulie Sisoho, the witness said that she is a banking officer at level two, and that she supervises transactional services in the bank, adding that she was employed in 2002.

When quizzed by the plaintiff’s counsel, as to who was responsible for appraisal in the bank, the witness responded that the Human Resources Department was responsible.

The witness told the tribunal that the staff handbook doesn’t state that there is an appraisal committee at the bank.

The case was adjourned till 15 February 2011 for continuation of cross-examination. 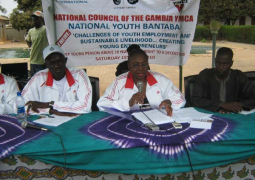