Dodou Sanneh, former reporter with the Gambia Radio and Television Services (GRTS), yesterday told the court that the Director General of GRTS, Momodou Sanyang, told him not to talk to the local and international media, but to accept his dismissal in good faith.

Dodou Sanneh was testifying in his defence over the allegation of giving false information to a public officer, preferred against him before Magistrate Bojang of the Banjul Magistrates’ Court.

Sanneh told the court that his service with the GRTS was terminated on 7th September 2006.

Explaining the nature of his work at GRTS, Sanneh recalled that during the election campaigns, political parties are assigned a GRTS crew to cover them on the campaign trail.

“I was assigned to cover the opposition UDP and Coalition campaigns,” the defence witness told the court.

He added that it was whilst he was in Baddibu, when he received a call from his senior, Ya Abbis Njie, asking him to identify the location. Ya Abbis Njie further told him that Pierre Sylva was coming to take over from him.

Sanneh said he told her that they were closer to Njaba Kunda Junction, and he would be waiting there for the driver.

“I asked her what the matter was, but she only told me that GRTS DG asked her to inform me to come back”.

Ansumana Nyassi, the GRTS driver, came with Pierre Sylva, and he (Sanneh) returned with the driver.

“The following day, I was taking bath and I received a call from Kebba Dibba (Sanneh’s senior officer), which was answered by my niece,” the accused told the court.

He testified that he was informed by her niece that the caller told him to pass to him.

“Upon arrival at Kebba’s house, he told me that DG Sanyang asked him to inform me to give him the balance of the emergence fund,” said the accused in his defence.

He adduced that he then left for work and, on arrival at GRTS, he met with Momodou Sanyang, the Director General.

“DG Sanyang praised me, saying ‘Ke-ken do’ in Mandinka language,” said the accused, adding that DG told him that his reports were very good, indicating that he (Momodou Sanyang) made a mistake by sending all the experienced people to the field.

He added that DG Sanyang told him that the reason for re-calling him was that they have important programs at the office, as well.

“He asked me to do him a favour; to go to and collect a letter,” he continued.

“I was detained from 9 am till the following day, at the NIA conference room,” he told the court.

Still in his evidence-in-chief, Sanneh noted that during the night, he received a letter, but it was not sealed, which he read.

“It was indicated in that letter that my services with GRTS was terminated with immediate effect, and that I’m to surrender all things belonging to the institution,” he explained, adding that he was asked to pay his arrears of a loan he took.

At that juncture, his first, second termination and suspension letters were tendered in evidence as exhibits.

Continuing his testimony, he told the court that seven gentlemen approached him at the NIA, and said that his detention was in respect of a report that he filed on the Coalition’s campaign.

“They told me that I reported that 250 APRC supporters defected to the opposition,” the accused went on.

He said he told them that he was not aware of it, and that it was news to him, adding that he referred them to his bag at the NIA office containing his materials.

“The following day, I was asked by them to write about my working relationship with the Director General of GRTS,” said the witness, noting that he replied that their relationship was cordial.

According to him, he was later released and went home, adding that from the 7th to 13th September he did not go to GRTS, and from that period he never had audience with Kebba Dibba.

He said later Kebba came with a letter, and then he received a call from Momodou Sanyang to meet him in his office.

“Momodou Sanyang told me to accept it in good faith, and never give any interview to any media be it local or international,” Dodou Sanneh told the court.

He said that DG Sanyang later asked him to go to the personnel officer, Adama Mboob, to give him an annual leave letter, which he did.

He (the DG) told him that this would ease the controversy, before he could return, and that before his annual leave he was going to the office normally.

Still testifying in his defence, Sanneh asserted that it was on the 15th November 2006, when DG Sanyang called him again, whilst he was at home, informing him to cover a program of the Senegalese General Chief of Defence Staff who was coming to The Gambia.

He adduced that, on the following day, they received him and also paid a courtesy call on the Senegalese High Commissioner at Pipeline, which he covered.

After the news covered was broadcast, he received a call from the former CDS, Lang Tombong Tamba, that the report was good and that he wanted copies of the CD of all the program.

“I informed him that all copies of the tape were handed to the DG,” said the accused, noting that it was then Momodou Sanyang came into the news room and tapped him on his back saying, ‘Ke-ken do’ your report was good”.

He told the court that DG Sanyang further told him that Lang called him for copies, and even the ‘Big Man’ requested a repeat of the program.

He said that DG Sanyang later called him to come and do the highlights together with him and that, when he arrived, the DG told him that it was not possible and he would have to wait until 7 pm for his live program.

According to him, he later came for his continuity announcement, and the DG told him that he has an assignment for him in Basse, for which he (the accused) has to come in the morning.

“On arrival at GRTS, DG Sanyang asked me to see Adama Mboob,” adding that on meeting Mr. Mboob he was handed his termination letter, without any reason.

Still giving evidence, Sanneh revealed that whilst in his village on 27th November 2006, his wife called him and told him that two persons came to his house requesting for his papers, which they went with.

“When I came back, DG called me and said that he was trying to liaise with the ‘Big Man’ for him to be reinstated, adding that he should not give any audience to the press.

He adduced that he (Sanyang) again referred him to the accountant’s office to give him an advance payment, which he did, adding that all this was to make him keep quiet.

“I later lodged a complaint at the Ombudsman’s office for my wrongful dismissal. For four years there was no result. That was what warranted me to write a petition to the Office of the President,” he stated. 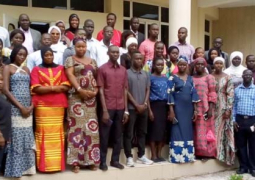