Musa Kanteh, chairperson of the of Association, said the furniture which includes chairs and tables were mobilised by the Councillor of Kafuta Ward Balla, Musa Darboe through Brikama Area Council.

Mr. Kanteh took the opportunity to thank the Councilor and Brikama Area Council for the gift, which he said, would go a long way in minimising the constraint patients normally face at the Centre.

According to him, his Association has also embarked on painting series of zebra crossing both at the health centre and the school, which he added, is the entrance and exit points to the Kafuta village.

This, he added, is designed to reduce the frequent road accidents, which has claimed the number of lives in the past in Kafuta within eight months period.

He thus expressed his Association’s resolve to work hand in gloves with Area Council, the Councilor of Kafuta Ward, the Village Development Committee of Kafuta and other partners.

For his part, Balla Musa Darboe, councilor of Kafuta Ward maintained that he has been closely working with the Grassroots Association for national development.

“We are still looking for more funds to support the communities even beyond Kafuta. We all know there are some constraints which includes water, proper health facilities etc. And we are trying to meet those demands in the future.”

Councilor Darboe thus called on the youths of Kafuta to unite and work for the development of the village.

“If we come together as one and work sure we will achieve our desirable goals of developing Kafuta for the future of our coming generation.”

He also thanked the BAC for giving him a helping hand to Kafuta Health Centre, which he believes, needs lot of renovations.

Modou Lamin Badjie, deputy nurse-in -charge at Kafuta Health Centre, thanked the donors for the support and promised to make the best use of the items.

Lamin Kaniko Bojang on behalf of the Alkalo of Kafuta village, called on the Kafuta VDC to give a helping hand to the organisations within the village for development hence they are not the implementing agency.

On behalf of Kafuta Village Development Committee, Ebou Jobe said VDC is ready to work with the Association for Grassroots Support for Communities for the development of Kafuta.

He informed that in the future they would embark on series of activities in order to develop the village.

Mr. Saloum Sheriff Janko, secretary general of Association for the Grassroots support of Communities reminded that the organisation is a non-profit making humanitarian organisation based in The Gambia with a motto to help and provide services to local groups of disadvantaged rural, urban households and individuals in rural communities as well as to promote and empower women’s and children’s rights.

“Drawing strength from our diverse resources and experience, we aim to promote innovative solutions and advocate for global responsibility, particularly on women and children’s rights’.

According to him, issues relating to women and children are at the heart of AGRSC’s community-based efforts to improve basic education, gender, equality and women empowerment, end gender-based violence, provide healthcare and nutrition, increase access to clean water and sanitation, expand economic opportunity among others.

The organisation, he went on, was registered with Attorney General’s Chambers (AG Chambers) under the Ministry of Justice in the year 2014. 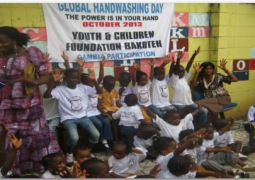